Are you from Kerala? If you are, you would have participated in at least a few sadhya. For the benefit of others, sadhya is a sumptuous Kerala meal, normally lunch that is served on banana leaves for special occasions like marriage, Onam, temple or church festivals and so on. It could be either vegetarian or non-vegetarian depending on the community that is hosting the celebration. Where non-vegetarian items are served, normally there would be separate table for vegetarians.

Originally there were no tables for sadhya. People used to sit on the floor on what was called ‘panthi paya’, a long narrow mat made from ‘kaitha’ (spike pine) leaves or grass. It required a special skill to eat without spilling the food into your lap. And imagine the strain on the servers, bending down all the time.

There is a saying in Malayalam to the effect that there should be no favoritism on the ‘panthi’ (the row of guests). All are treated equal and served till they are satiated.

The menu differs according to the region, religion and the resources of the host. Even a single standard item, say, ‘sambar’ (a stew with lentils and vegetable pieces) has different recipe in different places. Traditionally only local vegetables were used but the present trend is to include ‘English’ vegetables like carrots and potatoes and tomatoes as well.

The following photo is that of a meal served on banana leaf: 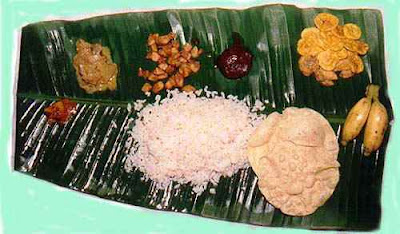 Two things are evident from it. First of all it is a regular meal at home. A sadhya would not only have a much larger menu but also assigned place on the leaf for each item, like pickle on the top left corner. This too could vary from one locality to another. But it is a system which helps the servers to identify with one look what items are to be replenished on the leaf.

Another interesting observation is that the meal that is shown in the picture is for a Nazrani (Syrian Christian). Did you notice that the left end of the banana leaf is folded in? Members of Kerala royal families eat with two full banana leaves, one on top of the other. Folding the end of the leaf is symbolic of that, and a privilege granted to the Nazranis by the Maharajas.

The finale of a sadhya is serving of payasam, a kind of kheer, as dessert. There are many types of payasams. Sometimes, depending on the purse of the host, even four varieties of this sweet are laid out.

‘Murukkan’ (betel leaves with lime paste, areca nut and tobacco) used to be provided for the guests to chew after the meal. But this practice, like smoking after food, is slowly fading away.

One sad thing now is that non-biodegradable plastic ones are substituting the real banana leaves for sadhya!

Readers are invited to add to this or correct if there are any discrepancies.

Something different about puttu, the versatile Kerala food.

I enjoyed the writeup on Sadya and the launch of the Kettuvallom...Great going!!!

Thank you Anu. This kind of support keeps me going.

Oh what a joy to read about sadhya -- and to relive those childhood days when we wished we had four stomachs to hold all the wonderful food we were served.

gardenia, the payasams, that's what I love best!