Nearer My God to Thee 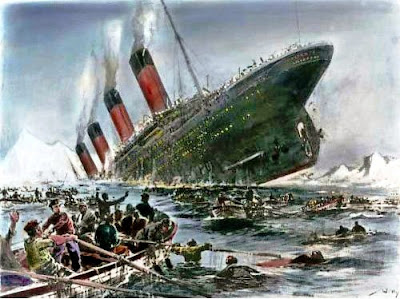 In the tumult and the shouting as the RMS Titanic was sinking on 15 April 1912, the panic stricken passengers could hear the soothing strains of a hymn. When the shocking realization dawned that the majestic ship would go down, the band leader Wallace Henry Hartley (1878-1912) and his men switched over to a melody that was a prayer for the 1500 odd people who drowned and the 700 plus who survived.

The song was “Nearer My God to Thee.” That was not the first time that the song was connected to a shipwreck. The passengers and the crew had sung the it when SS Valencia sank off the Canadian coast six years earlier.

There is a view that the last tune played by the Titanic band was either an Episcopalian hymn “Autumn” or a waltz, “Songe d’Automne.” But most researchers seem to discard this theory. Hartley had reportedly said once that if ever the ship on which he was sailing sank, he would sing “Nearer My God to Thee”. Quite appropriate too:

“Nearer My God To Thee” is a cherished and treasured hymn like Amazing Grace. It was written by a British lady, Sarah Flower Adams (1805-1848). She was keen on an acting career, and literary minded as well. She did perform as Lady Macbeth in a London play but ill health put an end to her acting ambitions.

When Sarah wrote the all time favourite hymn “Nearer My God to Thee” is not precisely known.  She belonged to the congregation of Reverend William Johnson Fox and perhaps through his connection it was published by C. Fox in London in 1841 in “Hymns of Anthems”. That was about eight years before the poetess died. Sarah’s version of “Nearer My God to Thee” had only five stanzas. But one more was added later by Ed­ward H. Bick­er­steth, Jr.

It is said that Sarah’s inspiration to create the beautiful song was Jacob’s dream in Genesis Chapter 28: 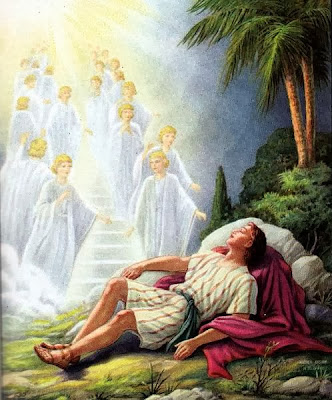 “Nearer My God to Thee” was first set to music by Sarah’s sister Eliza. New versions came later. But it was the American ‘Bethany’ melody by Lowell Mason (1856) that made the hymn universally popular. However, many British prefer the ‘Horbury’ tune. There is a third one which some believe was played by the Titanic band – ‘Propior Deo’. It was possible that British and American passengers could better recognize “Nearer My God to Thee” in this mode.

The universality of the hymn is interesting. Sarah belonged to the Unitarian congregation. This sect believes that there is only one God and do not accept the concept of Trinity. Yet, the Unitarian hymn “Nearer My God to Thee”, gained acceptance by the Methodists, Protestants, Catholics and in fact by all Christian denominations. 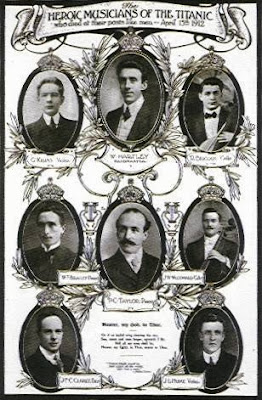 The Titanic certainly added to the appeal of the song in the 20th century. The entire band of eight played on till the end and went down with the ship. Just before death overtook him, Hartley had placed his violin inside its case which was strapped on to his body. When his corpse was found the violin was returned to his fiancée Maria Robertson. She had bought it for 40 pounds in 1910 and gifted it to Hartley on the occasion of their engagement.

Maria never married. When she died in 1939, her sister donated the instrument to the Salvation Army. It was no longer a treasure, as it had been to Maria and nobody bothered. It changed hands a few times.

But the violin re-emerged in an attic in North Yorkshire in 2006. A great deal of investigation went into its authenticity. Finally, the experts agreed that it was the genuine Hartley “Nearer My God to Thee” violin of the Titanic.

The violin was auctioned last week in Dewsburry and went for a million pounds. According to one calculation the 40 pounds which was the original price of the instrument in 1910 would today be the equivalent of £2,630.

And here is the last song played on the million pound instrument: 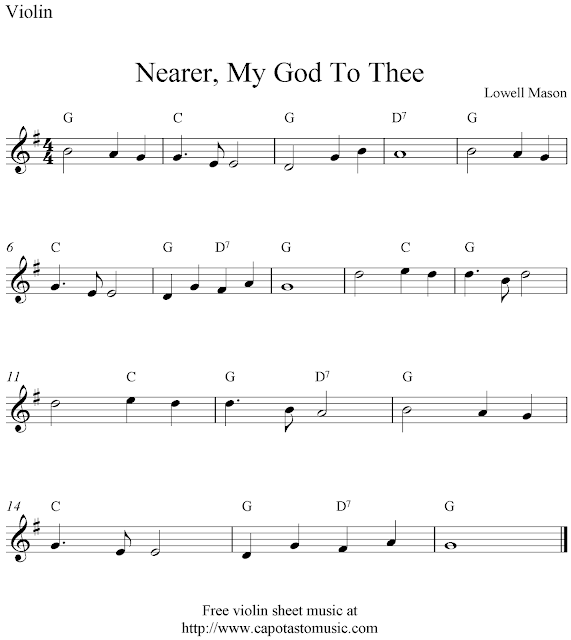 Titanic painting by Willy Stöwery.
Jacob's Dream is from the web. Painter's name not known.
Photo  of Titanic Band is from Wikipedia.
Wallace Hartley  is at the top, center.

Thomas Daniell (1749 – 19 March 1840)
was a British landscape painter.  He spent ten years in India on three trips and painted many scenes. Some of them are reproduced below from Wikimedia Commons. 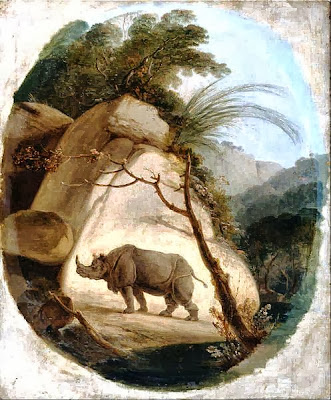 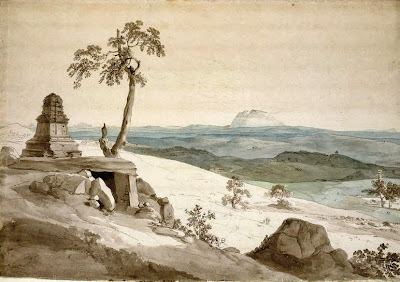 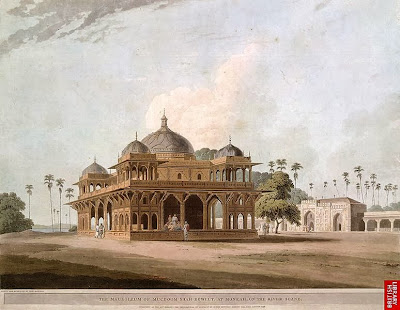 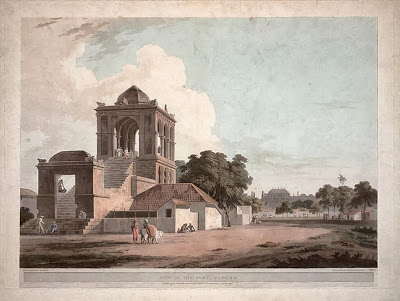 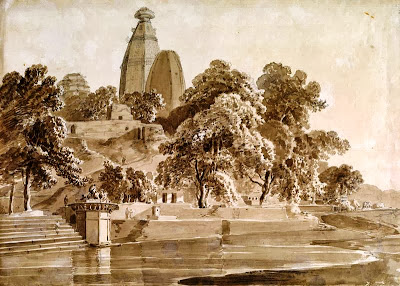 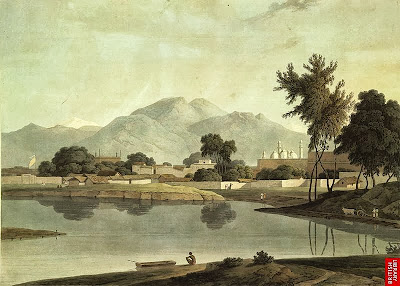 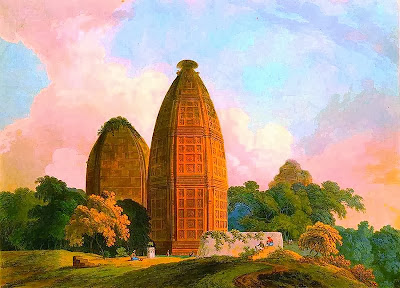 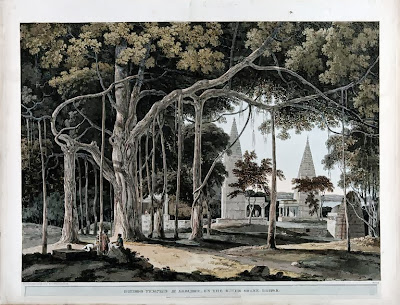 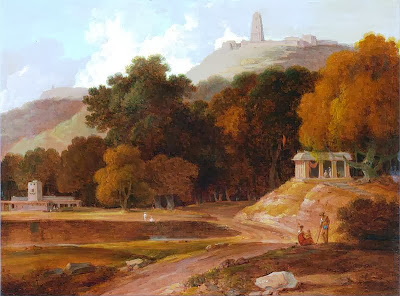 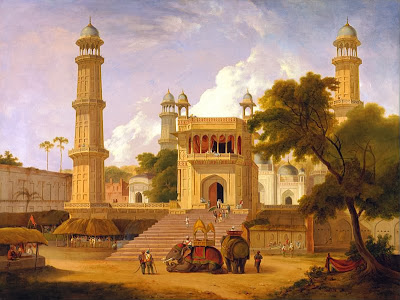 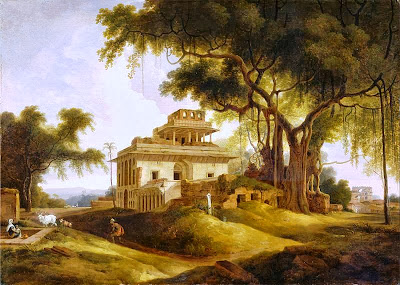 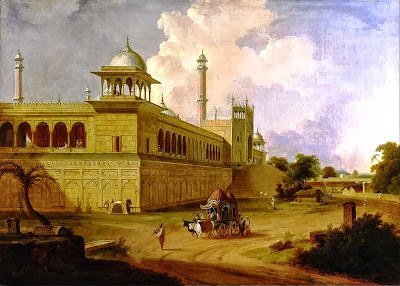 
One of the biggest scams in Kerala in recent years is the solar energy project promoted by Team Solar. The key persons in this are Saritha Nair, a well connected woman, and Biju Radhakrishnan. It is said that the woman is involved in 30 plus cheating cases and has undergone imprisonment.

There are several allegations that Saritha has considerable influence with the Kerala State Government and politicians. The Opposition has been demanding a CBI investigation and judicial enquiry into the Solar Scam. A probe about at least one case by a Special Investigation Team (SIT) of Kerala Police is already on.

That is about an allegation that a businessman, Sreedharan Nair, met the Chief Minister (CM) in his office along with Saritha and then invested large amounts in Team Solar. This was disputed by the Government and demand arose that the CCTV records in the Chief Minister’s Office premises be examined. The Government refused saying that the CCTV had only 15 days capacity to store visuals. A Public Interest case was filed in the Kerala High Court for recovery of CCTV records.

Earlier, in some cases in the High Court involving Saritha and her team, a few of the comments of the then sitting judge appeared to be adverse to the Government. After Onam holidays that judge was changed and a new one was appointed to the concerned bench. The change had attracted a great deal of criticism.

By the time the new judge, Harun ul-Rashid heard the CCTV case, the footage had been already collected and sent for lab confirmation by the Special Investigation Team (SIT), which had also interrogated the Chief Minister. The case therefore had become irrelevant. All that the judge had to do was to close it.

But he reportedly went into matters which were neither contained in the prayer nor connected with the petition. He, it seems, said that there was no need to examine the CCTV visuals, they were irrelevant, Sreedharan Nair did not accuse the Chief Minister in his (still secret) statement to the concerned Magistrate, and even if the CM had advised the man to invest with Saritha, there was nothing wrong with it.

Well, there has been an argument by some politicians that the State has not lost a penny in the Saritha affair. They seem to forget that in most cheating and theft cases State funds are not affected.

Also they contend that Sreedharan Nair had given two cheques to Saritha even before meeting the CM on July 9. Surely the court and the public know that handing over cheque does not amount to making a valid payment. Only on encashing the cheque the disbursement takes place. When did Saritha encash Sreedharan Nair’s cheque? Some claim that the amount was for a small portion of the contract. Did the court go into all these before making sweeping statements?
What is shocking is that these observations of the High Court have come when the investigations into the scam are still progressing and cases are yet to be filed. Won’t the verdict adversely affect the enquiry and the trial still to come in the lower courts?

Recently the same Judge had reportedly said in a speech at Tellicherry something to the effect that the mood of a judge (caused by different factors) affects his judgements and that the lawyers should temper their cases before him suitably. The Tellicherry Bar Association has protested and reported the matter to the Chief Justices of the Kerala High Court and the Supreme Court. Fortunately, we have a system to correct any aberrations.

One sad fall out of all these is that many people who believed that the CM is innocent may start doubting that he has done something wrong and there is an attempt to cover up.

Do you like a cocoa drink? Well, the Mayans were sipping it three millenniums back. They preferred it cooled, and without sweetening. Probably they were aware of the extraordinary nourishment contents, health benefits and the sensuality of the brew. Modern research confirms the several advantages of this gift of nature. I shall deal with that towards the end of this post. That will also clarify why the Sanskrit word Ananda is linked cocoa in the title. 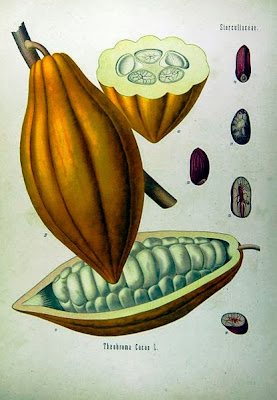 The Spaniards introduced cocoa to Europe. It didn’t catch on for several years till someone thought of adding sugar to the drink. That was a hit and the beverage caught on with the elite. The sudden boost in demand for cocoa made commercially interested people rush to the tropics looking for suitable land for establishing plantations. 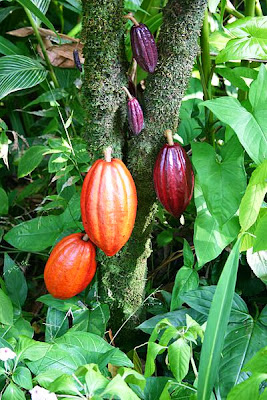 Cocoa plants, which are raised from seeds, can be grown in several types of soil. For instance, in Kerala, India, one can find cocoa shrubs from sandy coastal areas to the brown earth of the hill slopes. Most of these are grown as inter-crop.

The major producers of cocoa are Ivory Coast, Indonesia, Ghana, Nigeria, Brazil, Cameroon, Ecuador, Dominican Republic, Papua New Guinea, Malaysia, Colombia and Mexico. India contributes only about 12,000 tonnes in the world production of 4000 thousand tonnes. But efforts are being made to bring more areas in different States under cocoa cultivation. There is a substantial yearly increase in the world cocoa output.

The pods which grow on the stem and the branches do not ripen at the same time. Every 3 or 4 weeks those which are ready should be cut off without damaging the wood. The pods are then broken open and the beans scooped out for processing. The shell has no commercial value except for making compost. 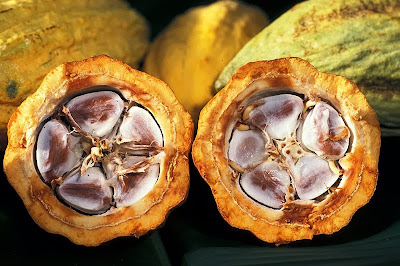 The beans are fermented, dried, sorted and cleaned. This is followed by winnowing, roasting, grinding, and pressing. The last mentioned process is meant to extract cocoa butter which is essential for chocolate making. After removing the butter, the compressed cake is powdered for making beverages and for cooking.

Cornell University, American Association for the Advancement of Science, Department of Nutrition at University of California, and others have done much research into the medical advantages of cocoa. Please do read 7 health benefits of drinking hot cocoa. Coco intake is cardiac friendly in different ways. It can reduce the risk of cancer. It even helps you to think better. Cocoa contains sufficient quantities of Anandamide (named after the Sanskrit word Ananda which means bliss). It is a mood enhancer.

Which is better, solid chocolate or drinking chocolate? The former is comparatively at a disadvantage because of the presence of saturated fats. If you go in for off the shelf instant hot cocoa mixes, the problem is that they often contain all kinds of ingredients which may nullify the benefits of the base material.

If you want to have a genuine drink follow 5 healthy recipes for hot cocoa.
Ananda, paramananda.

( All pictures from Wikimedia Commons.).

Posted by Unknown at 7:54 PM No comments: