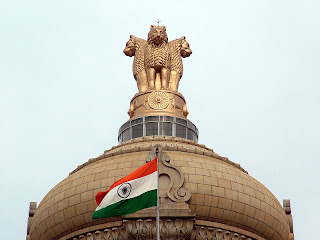 There is no Hindu India.
There is no Muslim India.
THERE IS ONLY AN INDIA OF THE INDIANS.

Mahesh Bhupathi will not play in the Olympics again. He made this statement after his miserable performance, along with his handpicked partner Rohan Bopanna, in the 2nd round of the London Games. It was the second time in a month that this team lost poorly at Wimbledon. The first was at the All England Championships.

While making the exit statement, Bhupathi was still assuming the selector’s role. He said he would be on the stands rooting for Bopanna, his partner, at the next Olympiad. That means Bopanna is already in the Indian tennis team for the 2016 Olympics. I suppose Bhupathi will announce the second player in due course.

Normally, the team selection should be the responsibility of the All India Tennis Federation (AITF). But Bhupathi and a couple of politicians made this organization ineffectual and really a laughing stock. As a result, instead of the potential medal winning combination of Leander Paes and Mahesh Bhupathi, which AITF originally chose, India ended up sending what could be possibly its third-string team for the Olympic laurels. I am making this statement after watching Leander Paes and Vishnu Vardhan play so brilliantly against the 2nd seeded French pair of Tsonga and Llorda yesterday.

The tampering with team selection was not in the nation’s interest. It was purely personal. What problem exists between Bhupathi and Paes is not known. But that should have been sidelined in the best interest of the country. Paes was willing to play with Bhupathi or anyone else. But the latter decided to play only with Bopanna. And he had his way, which led to an inglorious exit.

There were reports about Bhupathi protesting against Leander being chosen to partner Sania Mirza at the Dhoha Asian Games in 2006. But that team won the Gold Medal. Though they have not played together for a long time, their performance yesterday against Zimonjic and Ivanovic of Serbia was almost mixed doubles tennis at its best.

We don’t know who is behind the problem, but it is said there have been moves against Paes once he reached an enviable stature in world tennis that he still maintains and also when he became the Captain of the Indian Davis Cup team. Even a non-national who was imported to play for India in Davis Cup (he was packed off after a while) seemed to have been against Paes.

Maybe there is something wrong with this Indian hero with regard to interpersonal relations. But if that were so, it would have been unlikely for him to have gained the eminence he enjoys in world tennis. It seems that Paes has partnered 67 players in men’s doubles. This can mean two things. One is that he cannot get on with his partners. The other is that he can adjust his game to that of different partners and keep on winning laurels.

Let me conclude with quoting Vishnu Vardhan’s statement after  his remarkable performance yesterday against the French (as reported by The Hindu). “Leander is a huge inspiration for me… I am happy and fortunate that I play in the era of Leander.”

Posted by Unknown at 7:50 PM No comments: