Kerala: No coir in the coir land 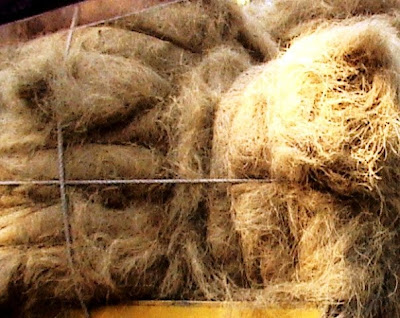 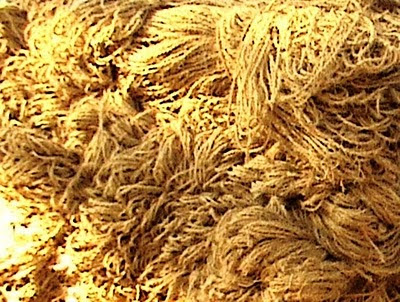 A story heard in Kerala recently: A man who had been a coir worker all his life was struggling to maintain his family. There was no work, no money, no food. Finally he gave up all hope and decided to commit suicide.

But there was a problem there.

He couldn’t find a coir rope to hang himself. Only plastic ones were available. Having been a loyal coir man all his life, he didn’t want to finish his misery at the end of a synthetic substitute. And that too in 2009 which has been declared by the UN as the Year of the Natural Fibre!

Jokes apart, the situation of the coir industry in Kerala which used to manufacture 85% of ’s coir products, is in a critical stage. The shortage of coir fibre which is used to manufacture end products like mats and mattings has paralyzed this sector which employs about 400,000 people.

About 50% of the green husks of coconuts available in the coastal areas of Kerala were used for extracting fibre and the balance used as fuel. Traditionally the husks from which the fibre is obtained would be retted for a few months. They were then manually hammered on a block of wood with a thick stick to separate the fibre and pith.

This processing was exclusively the realm of women who form 80% of the industry’s workforce. Till a few decades back, a prominent morning sound in the coastal villages of southern Kerala was the tattoo of retted husks being beaten. That was the heartbeat of the land. The fibre extracted in the morning would be spun into strings in the afternoon. In the evening the women would take the day’s produce to the local bazaar and barter it for provisions.

Through a chain of middlemen, the coir strands would reach the factories of Alleppey which was the hub of the industry. Semi-mechanized coir factories were started in this port town from 1859. The business prospered and that led to destructive trade unionism. The workers resisted modernization of the plants. Finally the factories were forced to close down almost a century later. A new set of entrepreneurs and practice of farming out orders on contract replaced the old system. Whether that benefited the workers is questionable. Businessmen made money anyway.

The shortage for coir fibre was anticipated almost half a century back. In the 1970s the State Government enforced the Husk Control Act. The control of husk trading passed on to cooperative societies and licensed dealers. That does not seem to have helped the coir workers. The quantity of fibre availability did not increase

Actually two more factors affected fibre production adversely. One was the mdite disease that spread to most of the coconut growing areas reducing the yield drastically. The problem was first noticed over a century back but no successful way to tackle it has been discovered.

The second hitch was the objection to retting that arose due to the growing environmental consciousness. The process does pollute the water and pose a serious threat to marine life. That was the end of the traditional channel of coir fibre supply.

But alert businessmen took advantage of the situation. Pollachi in Kerala’s neighbouring , soon developed into a major coir fibre supplier. For years now, Kerala’s coir industry has been depending on raw material from Pollachi.

But recently, this applecart has been upset by which suddenly started buying coir fibre from Tamil Nadu at high prices. The Chinese purchases which totaled 4196 tons till September 2008, suddenly jumped to 19,443 tons this year, almost draining supplies to Kerala. And the cost of coir fibre escalated by 50%.

The economics of these exports to is not really advantageous to the country. According to one estimate, earnings from an export of 35,000 tons of coir fibre are only Rs.40 crores. If the same quantity is processed in to make end products, it would provide employment directly and indirectly to about 2 lakh people and earn foreign exchange worth Rs.400 crores. But the coir fibre dealer would rather take the immediate profit than wait for the eventual benefit to the country.

The Kerala Government and the Coir Board are trying to tackle the situation. But are they on the right track? The initial step that is planned is to renovate the old defunct fibre extraction units. One’s immediate reaction is that it would be more money down the drain.

There is heartening news though from the Central Coir Research Institute (CCRI). They seem to have succeeded on two fronts. CCRI has developed a mobile fibre extracting machine that would cost less than Rs.1 lakh against Rs.1 million for the earlier stationary units. Another important claim of the CCRI is that they have discovered a method of considerably reducing the fibre extracting time.

But the question is whether the public sector can deliver the new process to the coir industry efficiently, economically and fast. Or will the new developments go the same way as the earlier fibre extraction units?

Narayanan and our cribs 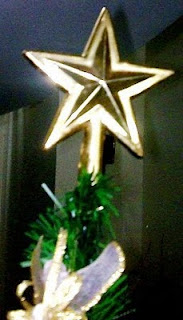 Decorating the house for Christmas is over. It looks nice, colourful. I never realized that there are so many ornamental items for beautifying a place. Each year new ones hit the market.

Most of them, I believe, come from – lights which cost anything from Rs.25 to Rs.1000 each, fireworks ranging from Rs5 to Rs.5000, and so on. Cribs, accessories, Christmas trees are all available in the shops. I wonder how much money flows out of the country on this account each festival season.

During my childhood, there were no Christmas decorations as such in our village. Every year stars used to be made at home with bamboo frame and colour paper. (Was it called paper? I’m not sure.) Either candles or small kerosene lamps were used to light them. They looked lovely, but if there was breeze, some of them could catch fire. This situation prevailed till 1957 when Olavipe was connected to the power grid.

Only the churches and a few affluent Christian homes used to have cribs in our area. And they were made locally, except the figurines. I think those were imported, but certainly not from . These cribs were normally crude jobs but nevertheless it was nice to have them.

He was seven or eight years elder to me and about 18 or so at that time. I think it was Ammachi. who put him on to making cribs. He could easily comprehend the idea – basically simulating the cattle shed where Jesus Christ was born.

Before midnight Narayanan had a beautiful crib ready for the statuettes to be placed.

The way he planned the job was remarkable. First of all he collected some thin reeds that grew along the edges of the rice fields and bamboo stalks. Now came the brilliant part. He looked around and selected a wooden stool that was not too tall, turned it upside down and placed it on the floor.

Presto, the base and the corner pillars of the crib were ready.

Narayanan made the roof with the bamboo sticks and fixed it on the posts. The sides and the top were covered with the reeds. Some hay was placed inside the crib for the cattle shed effect. That completed the job.

Having firsthand knowledge from watching Narayanan, I once tried to make a crib. I was with Ruby Rubber Works at that time and staying at Tiruvalla. I had collected the required materials and sat under a shade tree in the courtyard with a mug of chilled beer. My children were around me, watching with fascination.

Suddenly the elder boy, about four years at that time, vomited. ‘Daddy, he drank your beer’, his elder sister said, rather frightened. I took him inside, cleaned him up with the help of my wife and since he was asleep, put him on a bed.

Then I phoned the family doctor. He listened carefully to me and came out with statement, ‘Let the boy sleep it out. He will be okay.’

That year we didn’t have any crib for Christmas.

Coming back to Narayanan – I don’t know for how many years he went on making the crib exclusively for us. It must be some sort of a record. He is still alive and mobile, but unfortunately his eyesight has been failing for sometime now. His crib-making days are over.

Narayanan’s son Rameshan, a fine chap, is with us. He doesn’t make cribs, but is a driver. 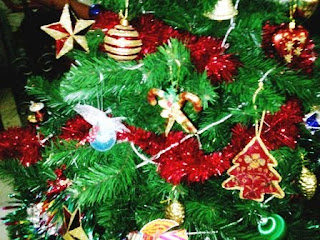 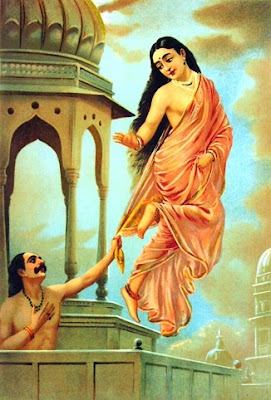 Now the mantle has fallen on cinematographer-director Santosh Sivan. The lead female role is to be done by Karthika, daughter of Tamil (also Malayalam) actress Radha. The screenplay, written by the director himself, is ready. Madhu Ambat is to handle the camera. Music is by Ramesh Narayan.

The name of the cinema which is to be made in Malayalam is Makara Manju. Makaram is a winter month in the Malayalam calendar. Manju means snow or mist. Therefore an appropriate translation of the title could be Winter Mist.

While Lenin was fine-tuning his project, another movie on Raja Ravi Varma has been completed, in two languages – ‘Rang Rasiya’ in Hindi and ‘Colours of Passion’ in English. The Ketan Mehta production features Randeep Hooda and Nandana Sen. Some media reviews call it a sensual movie.

There was a proposal for a third project on the same subject, in Hindi, with the title ‘Suryamukhi’. I have not been able to ascertain what its current status is. The well-known Malayalam director Shaji N. Karun was to handle it.

But Lenin Rajendran is planning to tell the story from a different, new, angle. It was the Urvashi and Pururavas painting (see image) by Raja Ravi Varma that inspired the director. The touching tale of the love between Urvashi and King Puruvaras provides the background.

Using that setting, Lenin Rajendran plans to present the emotional parting of the painter and Anjali Bhai, his model for Urvashi. This involves the lead players acting double roles. Santosh Sivan has to play the painter and the king, and Karthika, who might have a different screen name, is to act as Urvashi and Anjali Bhai.

One can safely expect a good product from Lenin Rajendran. But when will the movie be ready for exhibition? The plans for shooting are reportedly ready. The locations include , Kabani, and Mumbai.