Was health providing pomegranate the fruit in Paradise lost? 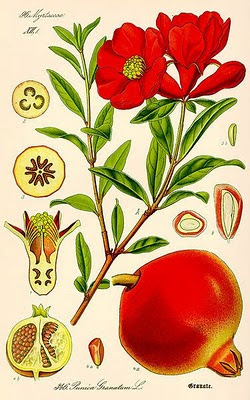 Many believe that the Garden of Eden was lost because Adam and Eve ate an apple against the wishes of God. But it could very well have been a pomegranate that was the fruit of temptation. These fruits are red/reddish and about the size of an apple (at least many of the hundreds of verities). Along with olives, dates, figs and grapes, pomegranate was among the first agricultural produces of man. Undoubtedly, it is an ancient fruit.

Songs of Solomon contain one about orchard of pomegranates. This fruit certainly has great significance particularly in Judaism and Christianity. I believe that the Old Testament mentions pomegranate 25 times.

At one place I read that a pomegranate fruit contains 613 arils (seeds) and that the Torah has equal number of mitzvot or commandments. The writer of that piece does not claim to have actually counted the number of seeds the fruits contain. Somewhere else it is mentioned that each pomegranate fruit has 840 seeds. A few arils less or more do not really matter.

It is said that is the original home of pomegranate (Punica granatum) which is a deciduous shrub or a small tree. Probably the lower Himalayan slopes too had them. The cultivation of pomegranate spread to the and then, much later, to the other parts of the world.

Probably more pomegranates are used for extracting the juice than eaten directly. Other modes of consuming this fruit include liqueur, ice cream topping, jam, blended with yogurt, and for flavouring in certain cuisines. In some churches of and pomegranate seeds are mixed in the dough for alter bread on ceremonial days.

It is worthwhile to remember that the skin of pomegranate contain quite a lot of tannic acid. They were actually used for leather tanning once upon a time. The juice stains body, cloths and plastic. It is advisable to use hand gloves, apron and glass containers while making/handling pomegranate juice.

An easy way to separate the arils from the non-edible portion is to open the fruit and scoop out the interior into a bowl of water. The flesh coated seeds, which can be eaten raw, would sink to the bottom. The taste between sweet and sour depends on two things – the ripeness of the fruit and the subspecies.

Whichever way it is consumed, pomegranate is one of the earth’s most health giving natural products. Its medicinal values have been known from ancient times and and many of them have been reconfirmed by modern research. And the range is wide – from helping to firm up breasts beginning to sag to providing healthy hearts to combating certain types of cancers.

According to fellow blogger Dinakar KR (Dinu) pomegranate is said to be ‘a cure of all ills’. His article Some potentials and medicinal uses of Pomegranate in Daves Garden can be accessed at http://davesgarden.com/guides/articles/view/888/

In the leading pomegranate producing State is . The output is a little over 600,000 MT from about 94,000 hectares. The main varieties from that locality are Ganesh and Mrudula. Maharashtra Pomegranate Growers and Research Association, Pune, provides guidance for commercial cultivation of the plant. The email id of the organisation is amdusspune@yahoo.co.in . Some of the details about growing pomegranate are given at http://www.pomegranateindia.org/tips.htm

Next time you eat pomegranate remember that the fruit had symbolic importance to many nations for eternal life, fertility and bounty.