If you are in during summer and see soft, woolly white material floating in the air, don’t wonder whether it is mist beginning to form. In all likelihood there would be a white silk-cotton tree nearby.

The longish pods sometimes open on the tree and the white fiber that cover the black seeds blow off in the wind. The tree sheds leaves in summer. From a distance, pods would look like brown bats hanging on dead branches.

In Kerala, this tree is known as panjimaram or seemapool. The botanical name is Ceiba pentandra Linn. (Please verify this.) It is also called kapok tree. Some of the names in Indian languages are semal, tella buruga, panji tannaku, shweta shalmali, safed savara, and schwetsimul.

The tree normally grows to a height of more than 50’. While it is young, the bark is green and has thorns, but turns brown as the tree grows older. White flowers bloom on the ends of the branches. There is also a tree of the same family, which has red flowers.

The floss or cotton from the pods is used to stuff mattresses, pillows and cushions. The fiber does not have sufficient strength to be spun into yarn or woven into cloth.

Separating the seeds and the floss is a messy affair. It is done by churning the contents of the pods. At Olavipe we have a man called Outha, a jack of all trades, who is an expert in handling this job. When he is finished with it Outha would look like a faded photograph with the fiber all over him. Not enough to make him look like a snowman though.

Till doing some research yesterday I was under the impression that the only use of this tree is to provide floss for stuffing. That was wrong. The oil from the seeds of kapok tree is used for cooking as well as soap making.

But it seems that the root and bark have several medicinal properties. According to some papers they are useful in managing constipation, urinary retention, tumors, seminal weakness, flatulence, colic, and type II diabetes. It is an aphrodisiac as well.

I was ignorant of the true value of the kapok tree. But not the people of Puerto Rico. It is their national tree.

(A request: Will knowledgeable visitors to the site add and/or correct what is said here? Thank you.)

The drawing on top is from Wikimedia Creative Commons. It is in the public domain. The photos below (copyright reserved) are from Olavipe. Click on them to enlarge. 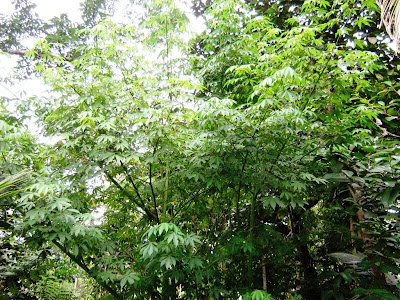 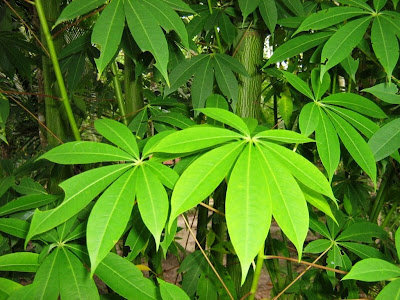 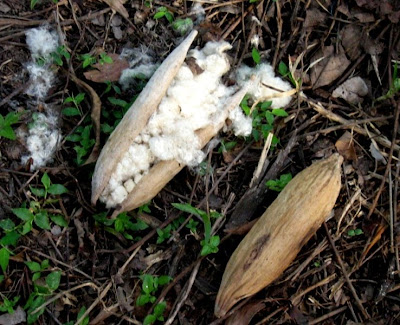 Of cuisine, climate and ketchup

One man’s bread is another man’s poison. So the saying goes. Here are some random thoughts on the subject.

I suppose cuisines develop and stabilize due to several factors. It could be said that recipes were originally created with grains and vegetables that were locally available. Here the climate plays a part. In , only certain things grow. There is not much of seasonal variation.

It is different in the North. For instance, in the spread on the table varies according to the seasonal availability of vegetables. Maiji, says in her interesting post 'ENGLISH' VEGETABLES (tomatoes, cabbage, cauliflower etc.) were rarely used in South Indian households. In the first half of the 20th century, who would have thought of carrots in sambar?

One of the reasons for the absence of ‘English’ vegetables in the common cuisine then was non-availability. Those days they were cultivated in the cooler climates, such as that of the Nilgiri Hills. Once they became easily obtainable, people introduced them in their daily meals.

Cuisines are dynamic. People are always experimenting for improved or tastier dishes without flouting accepted parameters. Some succeed, but their creations are more often than not used for special occasions. The regular meals usually contain conventional food.

Sometimes we accept imported food ideas. The hamburger is an example of this. It was introduced in the in the 1880s. Made from beef, they became very popular in a short time. Another well-liked short meal in is the hotdog, made with sausages.

But among the two, it was the hamburger that conquered , particularly the younger generation. The reason is the adaptability of the product. It can be made with any meat (with chicken or mutton for those who shun beef) or with vegetables. Hotdogs probably didn’t catch on in because sausages can’t be made with vegetables.

Talking about adaptability, first we had the simple pancake dosa. Then came the masala dosa filled with potatoes and onions, and sometimes even carrot pieces. Indian Coffee House’s masala dosas have even beetroot. This was followed by cheese dosa, keema dosa, and so on. The Pai brothers of , I believe, offer about 50 different types of dosas. In Chennai I came across tomato uthappam which resembles a pizza.

Pizza too is a foreign conquest of . Once a trend is set, there is no stopping it. Even vada pav, which is so popular in Mumbai, has a foreign element. The bread part is certainly post-Portuguese.

Adaptation is fine as long as it blends. But sometimes one comes across atrocities. The other day we bought a parcel of samosas from a famous Chennai eatery. On opening the packet we were shocked to find sachets of tomato sauce instead of the conventional chutney.

Perhaps some people like the combination. I don’t. May be tomorrow it would be idli with tomato ketchup. Who knows?

Britain strikes back at the Empire
Posted by Unknown at 11:47 PM 12 comments:


An industry dies and from its ashes rises a new one. That is the story of Delftware, the blue and white pottery made in the town of in . The term Delftware has almost become a generic one and is indiscriminately applied to Dutch ware, the pottery from The Netherlands.

While photographing Gzhel porcelain collection at Thekkanattu Parayil, Olavipe for the post Art: Blue porcelain from Russia I had come across some Dutchware. That was how I ended up writing this.

In the early 17th century, was noted for several things. It was the home port of the Dutch East India Company. The area had several breweries but the business was on the decline. The place attracted a number of famous painters. Among them was the local maestro, Johannes Vermeer (1632-1675). The , as they came to be known, concentrated mainly on local subjects.

A painting of scene by Johannes Vermeer (from Wikipedia) is reproduced below: 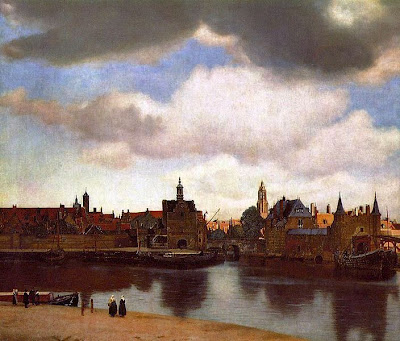 The floundering brewing industry was almost wiped out by what is known as Delft Thunderclap. A gunpowder store in Delft exploded, killing many people and causing extensive damage to the town.

Most of the breweries which survived the calamity closed down. Their buildings were taken over by potters. Pottery patterned on Majolica was already being made in and other places, probably by migrants from . After the explosion, the industry focus shifted to .

Then a trend of copying the designs on Chinese blue pottery started. They were popular but slowly gave way to designs with local scenes and religious motifs. The products included tiles, jars, plates, clogs, pictorial plates and so on. Three photos (copyright reserved) taken by me from among the pieces we have are reproduced below: 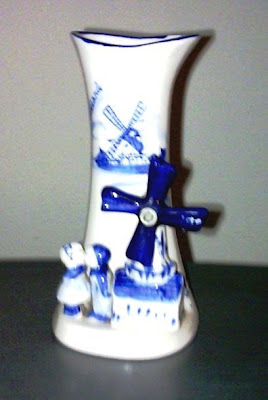 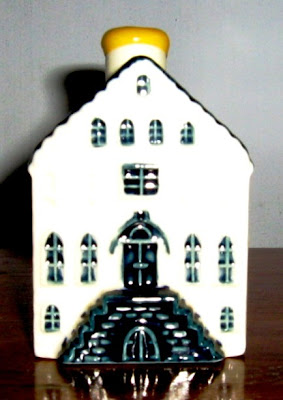 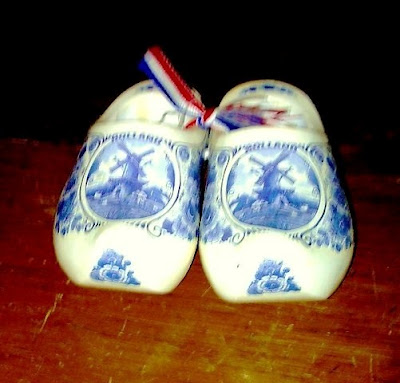 The popularity and iconic status of Delftware can be gauged by the fact that the tailfins of seventeen British Airways planes were painted with design based on Delftware. See the following photo from Wikipedia: 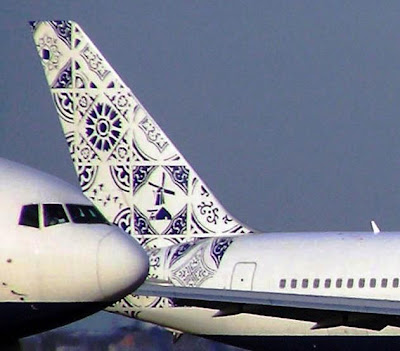 The golden era of as a center for pottery was from mid 17th century till the 1850s. 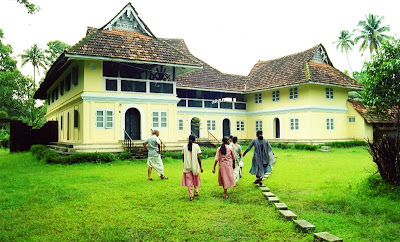 Another photo of
A Kerala Tharavad.

This picture of the Velliara Parayil 'ettukettu' was taken
by Ebbey Tharakan during the years the house was unoccupied.
Copyright reserved.
Click to enlarge. 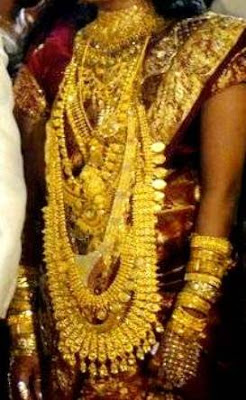 Thumpa (Leucas aspera, Dronapushpi, Gumma Bhaji, Karukansoli, pansi-pansi, paysi-paysi, sipsipan, sula-sulasihan) is part of my childhood memories in . The plant can grow up to a height of two feet depending on the species. The bell-like flowers are normally white. In fact, in Malayalam, the native tongue of Kerala, thumpa flower is a synonym for pure white.

Thumpa used to grow wild all over the place. Even children knew it had medicinal value. The most common usage was in case of any skin problems. If you touch a poisonous weed or plant and there are itching and/or skin eruptions, take a few thumpa leaves, crush them in your hand and apply to the affected part. The relief is almost immediate.

The medicinal properties of Leucas aspera are accepted in all the areas where the 100 species of the plant grows (Indian Subcontinent, , , , , South America, and ). The main uses of the plant are in treating psoriasis and other skin conditions, painful swellings, snake bites, insect stings, and coughs and colds. It is said that a decoction made from the plant hastens menstruation.

In some countries, Leucas aspera is used as a fragrant herb in cooking. It is also a natural insecticide. In Kerala, the plant is burnt to ward off mosquitoes.

What used to grow wild in our area and many parts of Kerala started disappearing about four decades back. We found that the use of chemical manure and pesticides was the cause. About twenty five years back we shifted back to organic farming. The thumpa plants returned to the scene as you can see in the photographs I took in Olavipe. 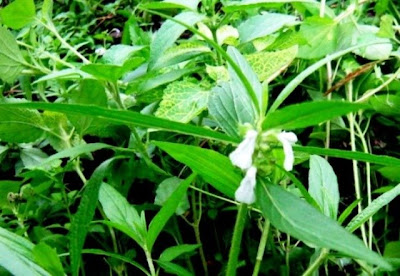 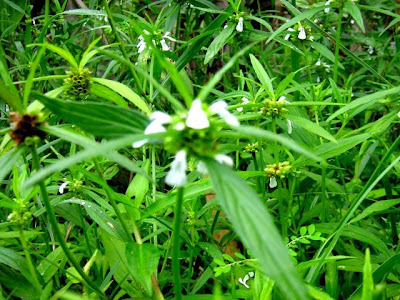 Leucas aspera can also be cultivated commercially. Seeds can be ordered online. Dry, sandy soil and full sunlight are required. The suggested planting distance is 12 to 15 inches apart. You could also have a few clusters of Leucas aspera in your garden, either on the ground or in pots.

These are great plants to have in the vicinity residential houses.

Whichever religion one might belong to, nobody would deny that the many centuries old Twin Churches of Ramapuram, Kerala, are beautiful. And there is so much of history behind them.

The Church wanted to demolish them and build a new church. There were widespread protests including from this blog (Churches on demolition line.). Finally the Kerala Government declared them to be heritage structures and brought them under the control of Archaeology Department, thereby preventing demolition.

The Church appealed against this order to the Kerala High Court. Earlier this week the HC ruled in favour of the Government and all those believe that heritage monuments should be preserved. It is not known whether the Church will go for further appeals.

It is difficult to understand the Church policy of demolishing old structures. I don’t recall hearing about an ancient temple or mosque being razed to ground to build a new one. The money spent on new churches to replace old ones could be utilized more meaningfully.

Nearer my home, the (A historic church is no more.) has been renovated. See photos below: 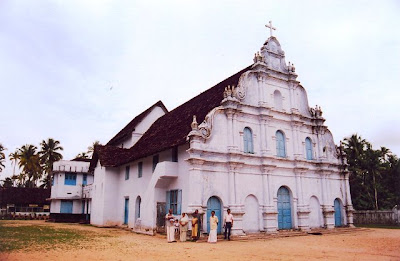 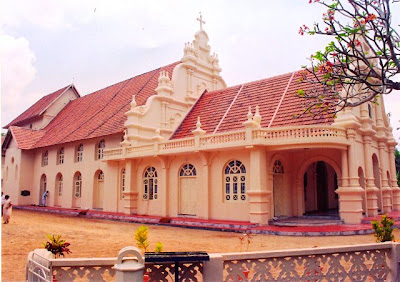 A saving grace here is that the architect has managed to retain some of the ethos. But lost in the process are the ‘Mondalam’ (picture below), 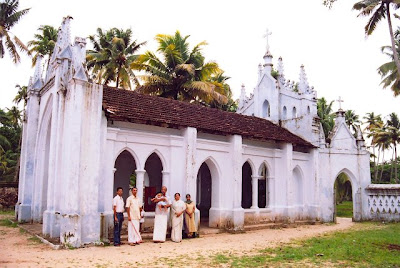 and more sadly, the beautiful frescoes that adorned the inside of the old building.

The next structure in line for the Church bulldozers is the Parayil Family’s 1861private oratory at Velliara (picture below). 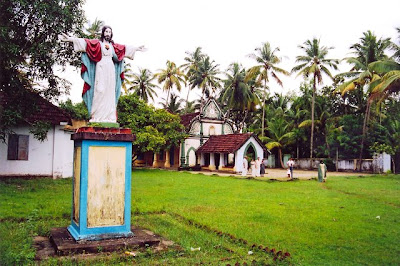 Naturally, we have objected.