Two days back a former colleague from Apollo Tyres telephoned to invite me for his son’s wedding. I was quite touched because we had no contact for about three decades. And the call kind of opened the memory box for me.

The idea of an automobile tyre factory came to my mind during the visit of the General Manager of Hungarian rubber industry to Ruby Rubber Works, Chenganacherry, Kerala. That was in 1968 or 1969. I was then the marketing manager of Ruby.

I mentioned the idea to Mr. Mathew Marattukulam who was my Managing Director.  He was interested in the suggestion and told me to go ahead. It was a really bold decision. I was made the General Manager of Ruby’s automobile tyre project.

The first steps were to get a license from the Government of India and to tie up a good technical collaboration. I met Dr. Rama Varma who was then the Chairman of Kerala State Industrial Development Corporation (KSIDC). Earlier he had been the chief of the Rubber Board of India. He was from the Cochin Royal Family, and a friend of my uncles.

The project idea appealed to Dr. Varma. He even suggested that the new tyre company could also take over Premier Tyres in which the State Government had substantial shareholdings.. That became a reality three decades or so later. At Dr. Varma’s request Mr. Achuthan Menon, the then Chief Minister of Kerala wrote a personal letter about our license application to Mrs. Indira Gandhi who was the Prime Minister. And Ruby got the license.

Mr. KT Chandy followed Dr. Varma as Chairman of KSIDC and took keen interest in the tyre project. In fact, he was the one who suggested the name Apollo Tyres. We were already on the search for a technical collaborator. Finally we tied up with General Tires, one of the five major tyre companies in US at that time.

The project cost estimate escalated considerably with the oil crisis in the early 1970s and the original promoters found it difficult to raise the funds. That was when Mr. Raunaq Singh stepped in and took over Apollo Tyres Ltd. But for him, the project might have been dropped.

Here are some old photos: 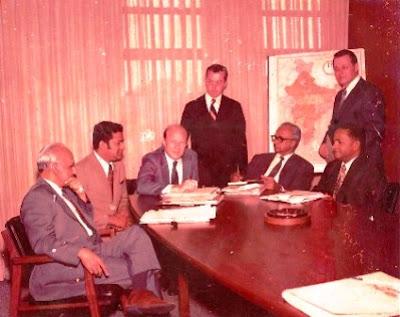 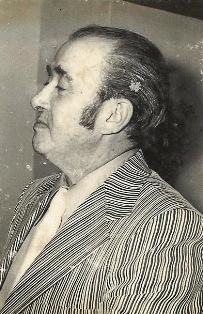 Mr. John Porosky. He was the General Tires man for the project. Earlier he had been involved in erecting the Ceat Tyre plant in Mumbai. We became good friends. 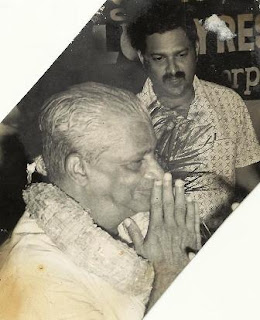 Mr. TV Thomas, the then Industries Minister, Kerala, at the Foundation Stone laying ceremony. He had been of great help to the project. I am in the background. Those days I used to sport a mustache. 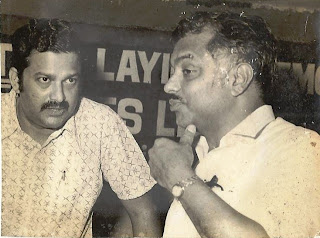 I am with Mr. AC George,
former Central Minister. He was instrumental in Mr. Raunaq Singh taking over Apollo. 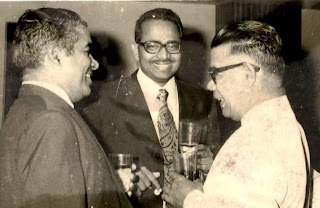 
Unfortunately I do not have a good photo of Mr. Raunaq Singh.

On this Republic Day
let every Indian male swear that he
will always honour Bharath Matha
and her daughters. 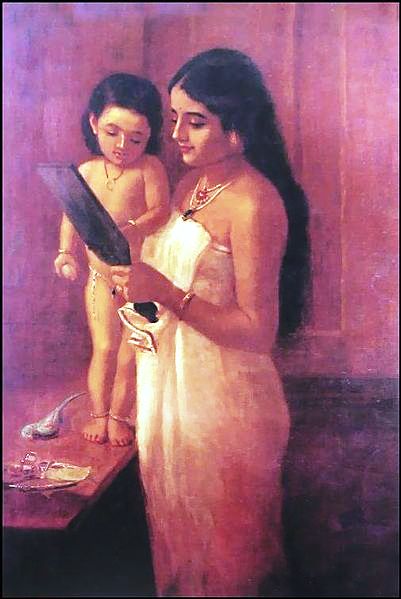 The painting is by Raja Ravi Varma.
Both images from Wikimedia Commons.


After the last year ended with the shock of Nirbhaya’s tragic end, everyone was hoping that things would be better in 2013. Sadly, the first two weeks of the New Year are loaded with a shocking array of crimes against women and children and absurd statements by people in important positions.

We have the habit of getting focused on just one point when a tragedy occurs. Now of course, it is crime against women. Blame the government, blame the police, and blame the judicial process. Make a lot of noise. Bring in Bharat, India, Sita, Ravana, Lakshmanarekha. Blame the female for getting raped.
Go back to women being confined to the home, to cook and attend to other household chores. Of course, shayanesu veshya which was considered to be an important quality of a wife has not been openly mentioned.

To find a meaningful solution, a problem has to be first understood and then analyzed in its totality. Recently two emails came requesting me to sign mass petitions to the President, CJI and the Justice Verma Committee about sexual crimes. Many of you too would have received the same.

Now, the question is whether these institutions would give importance to the number of signatures on the appeal or its contents. Perhaps a more effective action would be for each citizen to write to his/her Member of Parliament giving suggestions. I am sure that at least some of them would effectively take up the matter with Justice Verma Committee and other appropriate authorities.

The dilemma we are facing today is not just crimes against women. One is raping a woman by boys or men. Then there is sexual abuse of girls and sodomy on boys by senior men. Perhaps there is forced lesbianism as well. Women raping boys is not very rare. Incest and sex sale (a broad term which covers a lot of sins) are reported too. An equally unacceptable criminality is the tormenting of senior citizens by younger people sexually or otherwise.

Newspapers of the first two weeks of 2013 carry reports of almost all these crimes. The latest is from Punjab where a woman was reportedly gang-raped by seven men in a bus. A shocking situation indeed. How do we find a solution?

I do believe that the society has equal responsibility as the government to take effective steps. India or Bharat is a country which does not want the girl child. Sambandam which I mentioned in Rape & Punishment is no longer there, but we still allow chinnaveedu (a different house with a second wife or keeping a mistress) and certain sexual forays by men.

Today’s Deepika carried a statement by Dr. Sunitha Krishnan. She says that we teach girls from childhood to forgive everything. The girl child is always in the background. Unless this is changed a female cannot live fearlessly.

About Dr. Sunitha Krishnan -  At the age of 15 she was gang raped by eight men. She fought back to life and went on to take a Doctorate in Social Work. (I am proud that she studied at my alma mater, St. Joseph’s College, Bangalore.) She runs Prajwala. The institution helps women who have been trafficked and also finances education of thousands of AIDS infected children. Her work has been internationally acclaimed. It is touching to read Sunitha's blogspot. Incidentally, Sunitha is Bangalore born in 1972. Her parents are from Palghat, Kerala.

All of us cannot be such a remarkable person. But in our own small ways we can try to bring about a social change. A boy and girl talking or walking together does not mean that they are about to have sex. A reasonable freedom can only improve things.

Let us make a beginning in each home. Let us spread the message that a girl child is as much lovable as a male offspring. Let our schools teach the children, and public programmes educate the adults the importance of respecting women and elders. The government has the responsibility to enact appropriate laws and ensure effective policing and other safeguards.


ET Vasudevan’s Snehaseema directed by SS Rajan was released in 1954. The movie was a big hit. After half a century I saw it again two days back on the Asianet Movie Channel. Black and white print of course, but clear, and holding one’s interest throughout.

Snehaseema was notable for many reasons. It was the first Malayalam ‘war movie’ if one could use that label. There is quite a bit of World War II footage in it. During that time there were a number of Hollywood movies, and writings with the war background. Some similarities or adaptations are possible. But the Snehaseema story by Ponkunnam Varkey, a noted anti-Church writer of his time, has a strong social theme.

It is about Johnny (Satyan), an orphan brought up by the local priest. He grows up and becomes a teacher. Falls in love with the rich school manager’s daughter Omana (Padmini). Her father objects. He wants her to marry Doctor Baby (Kottarakkara), a friend of Johnny.

The lovers get married and have a daughter. But Johnny has to resign his job at his father-in-law’s school. To support the family he joins the Army – Air Force really. In a bombing mission over Burma, probably in 1942, his plane was shot down by the Japanese. He was missing in action presumed to be dead.

Three years pass. Persuaded by others, Omana marries Doctor Baby. They live happily though she carries Johnny’s memory close to her heart. And Johnny is not dead. He was a disfigured and partially handicapped PoW with the Japanese. The war is over and Johnny comes back. Omana now has two husbands, both having married her officially in the Church.

Absolutely complicated situation. One of them has to die to solve the tangle. But in Snehaseema, two die. It is well handled and does not offend the Church or anyone else. There might be silent tears in the audience. That adds to the Box Office clout.

The music is by V. Dakshinamurthy. I think it was the first time that a Malayalam movie tried to break free from the dependence on Hindi tunes. The lullaby Kannum pootti uranguka… became an all time hit. Adhwanikkunnorkum… was also popular. It is claimed that Dakshinamurthy, for the first time,   brought Carnatic raga into Christian devotional music with the song Kanivolum kamaneeya hridayam…

Satyan is good, as always. Padmini looks beautiful and does justice to her role. But Kottarakkara is rather disappointing. The Art Direction and cinematography are good, considering the limitations that existed almost 60 years back.

The cinema also gives an insight into the clothes used in Kerala during the mid-20th c. In a couple of scenes Padmini appears in chatta and mundu, the traditional white attire of the Nazrani women. The juba or kurtha had made its appearance, but those men who sported an upper garment mostly used long sleeved shirts. These had a 4-buttoned opening in front. Some of the shirts (not seen in this cinema) had a half inch pleat between the shoulder and the elbow. But the most interesting style was mundu worn at the waist over the shirt tails, and a single breasted jacket over the shirt. Some used a tie and a folded kuriamundu, a kind of thin shawl over the shoulders as well. The bush-shirt and subsequently short sleeved shirts became popular in Kerala only in the late 1950s.

Sorry for drifting off the main topic. Snehaseema is a milestone in Malayalam cinema history. A good movie. See it if you get a chance. It was dubbed into Tamil under the title Punyavathi. That was also a big success.

Posted by Unknown at 5:13 PM No comments: 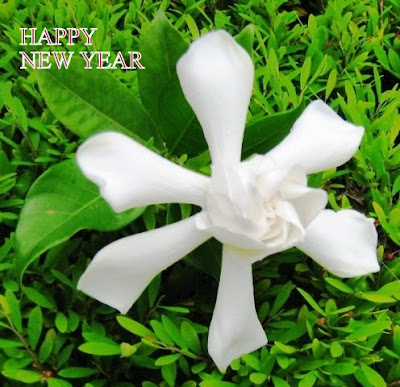