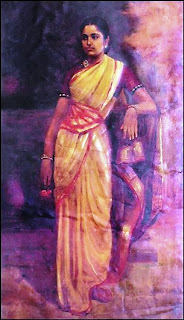 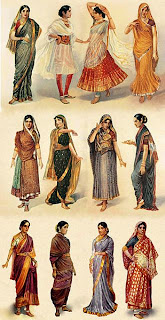 The top one 'YOUNG WOMAN' is by Raja Ravi Varma.

All pictures from Wikimedia Commons.
Posted by Unknown at 7:20 PM 3 comments:

There was a stream by my school

On every visit to our tharavad house I pass by my first school, at Palli Veli. That happens quite often. But I hardly notice the church owned institution consciously while driving by. You know, just another building, a different scene, en route.

But last week it was different for no apparent reason. Seventy years is a long time in human life, but not for a church. I stopped by the beautiful church that has just been built near the school. I remember the construction of the old church when I was a boy. That structure is still there, in apparently good condition. I can’t help wondering why a new prayer house became necessary and how much money was spent for it. But that was a passing thought.

It was the school that was in my mind. Mr. Narayanan Nair was the Headmaster when I joined the institution. It had two buildings. The long one was north-south and the other east-west. Both were thatched with pleated dry coconut leaves. For some reason Class I was in the middle of the main building. Class II was at the South end and Class IV in the north. The other building housed Class III. The logic behind this arrangement is still difficult to understand.

Would you believe that I was admitted to Class II because for some reason I did not like the teacher of Class I? Such things could happen those days – the Feudal Era, before World War II.

The region around the school was topped with white, loose sand. In fact the central part of Pallippuram Island where the school is situated was almost desert-like.  There were quite a few sand dunes. Some were pretty large. It was fun running up one of them and rolling down. A couple of times I have taken my children (grown up people now) on such excursions on moonlit nights. They loved it.

The school didn’t have many trees around it. If I remember right, all that grew there were three cashew nut trees and one tamarind. Now the desert like areas of Pallippuram Island has changed as the photo below from Wikimedia Commons shows: 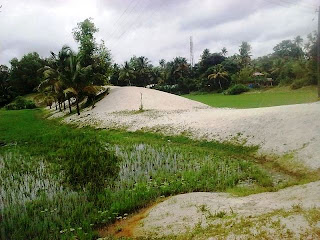 The greening of the region started with the locals and those who moved in planting coconut trees. Then the sand was mined deep enough in certain locations to enable paddy cultivation. Sand dunes were also leveled to build houses to accommodate the increasing population. It is hard to believe now that the place was once our little Sahara.

Where did all the sand go? In the beginning people just took away the earth to fill low lying areas. In fact that was the main use. The white sand was also periodically spread to beatify courtyards of large houses. Then, with the discovery that the sand contained silica, the manufacture of bricks and glass started. Today Pallippuram sand is a controlled item. It is almost impossible to get even a truck load for private use.

Oh, I nearly forgot the stream.

Between the school and the nearby church the land sloped gently to a small stream. Really a trickle, less than three feet wide and water level below one foot. I don’t know where it started but it came from north-east of the school, bent right and after a short distance turned left and flowed to a canal far to the south. The water was absolutely clear. One could even watch the tiny fish moving in the creek. They were not big enough to catch though.

The stream suddenly became a sports area. Some boys started making paper boats and racing them during lunch break. I was not aware at that time that many of the boys those days were poor and had no noon meal. That realization came to me only recently. (Please see A 100 years old school sustains the memory of Sree Moolam Thirunal Maharaja)

We, my cousins and me, used to have food brought from home and eat at the Vicar’s dining room. We sometimes joined the sailing game after that. But the amusement slowly faded away. The other boys probably could not get enough paper to make boats everyday. Another reason was the lack of excitement in the competition. There was no skill involved. All that one was permitted to do was to blow merely to free the vessels that got stuck on the growths in the stream and not to speed them in the race.

Then someone came up with a thrilling idea. The World War II had started and there were several stories going around about naval engagements between Brittan and Germany. Why not divide our paper boats to two fleets? Throw stones from the shore at the floating armadas and sink the vessels. The side with more surviving boats wins the battle.

What quashed this war idea was the lack of ammunition. In the white sand there were hardly any pellets or stones. All that one could occasionally find was a clam shell.

The potential admirals shifted to other run of the mill games. I wonder how many of them are alive now. But currently the place, Palli Veli, is a booming junction. The school has new buildings now, but in the same pattern. Wonder whether the Class II room in which I started my formal education is still at the south end.

Recently I read somewhere ‘Put the words “SAVE NOSTALGIA” in the message box'. That prompted this post.

ATMs go through the motions, but money doesn’t come

Yesterday morning I left home planning to buy some odds and ends and then have lunch at my Club. I didn’t have much money on hand but that was no problem because I was carrying the ATM card – insert it in the dispenser and presto, you get money.

The first ATM I went to was closed. That was no bother because there are so many such outlets in the area. I went to the next one. It was a new machine I was not used to. But everything worked perfectly except for one snag – no money or printed receipt came out but there was a message thanking me for using the facility. I tried again and the result was the same.

The que behind me was getting restless. I quickly got out and went to another ATM. All the procedures were right at that one too, but still there was no money in spite of a repeat operation. I met the manager of the bank and he was kind enough to send a staff member with me presumably to show me how to operate an ATM. That didn’t work either – I mean that the money was not dispensed.

Now I was stuck with a major worry. All the five times that my card was used the Teller Machine had displayed the appropriate procedures. Did it mean that every time I tried and got the ‘Thank you’ message the amount entered was being debited in my account? The bank staff that was sent to help me had no answer. The crowd that had gathered by then – ATM users and others – had different views.

I rushed to my bank and met the Manager. In a minute he confirmed that no money had been drawn on my card that morning and that the balance in my account was safe. According to him the problem might have been caused by some Network malfunctioning. Can’t they have a foolproof system?

I find two morals to this incident: (1) May be, one rupee in hand is worth two in the ATM, and, (2) Money at ATM is better than lunch at the Club.