A village temple scene in Malabar

This ethereal scene is an engraving based on
Daniell's drawings, 1835. It is so beautiful except that the herons seem to be
a little out of proportion. 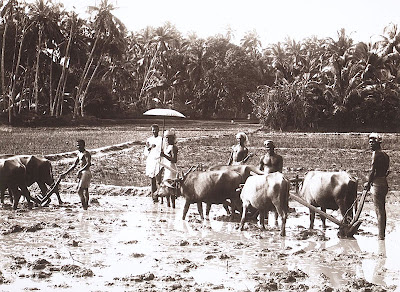 This photo of plowing land for paddy cultivation was taken in Kerala
in 1901. Can you recognize a change that has taken place in over a century?

Today there won't be a man holding a palm leaf umbrella for the master. He will cost too much and not many Keralites would like to be seen doing such low jobs.

Of course, the palm leaf umbrella has has been
replaced by modern ones and the master
can use one himself.

Kerala to have too many Medical Colleges

Those who have read my 2011 post Creating Gen Next Engineers would not have been shocked by Kerala’s engineering results this year. Now it would appear that Medical Education in Kerala too is on the slide.


According to Indian Medical Association (IMA) (Times of India Kochi, May 10, 2013) the doctor patient ratio in Kerala is 1:550. This compares very well with the developed countries. Obviously, Kerala does not need more doctors. The MBBS graduates are under-utilized. Many of them find it difficult to get well-paid jobs. Some of them are paid lower than a driver. To survive, they have to go to remote village/hill areas.

One can easily visualise the amount of money and the business involved. But is that the objective? The purpose of medical education is to turn out altruistic doctors for the benefit of the community. They should have the required attitude, knowledge and skills. The raw recruits have to be turned into competent doctors who have full understanding of organ systems in the human body, the problems that such complicated structures can face and how to correct them, and the capability to relieve pain and reduce the suffering of patients.

This is not an easy process. The very first requirement for a medical college, leaving aside buildings and equipments, is a set of good teachers. Faculty recruitment and development for a medical college is not an easy job. A good doctor need not be good teacher. And many of them are reluctant to to shift from practice to teaching. There are too many medical schools in Kerala now without sufficient number of competent teaching staff.

The proposed medical college in Manjeri, North Kerala, is awaiting clearance from the Medical Council of India. A major problem here is the availability of teachers. An attempt to recruit doctors from the government medical service failed. To get MCI clearance the government transferred the required faculty to Manjeri from other medical colleges. Such stop-gap arrangements have been resorted to earlier also. The damage such steps do cause is so obvious.

A medical college needs to have enough built up area for wards, operation theatres and so on. That is something that money can achieve. But it is essential to have sufficient number of outpatients with different types of diseases. Otherwise the students are likely to come out as experts in one or two diseases only.

There is another critical requirement which I doubt whether those who are keen on establishing medical colleges are even aware of – the availability of cadavers. Dead bodies are essential for the students to dissect and learn. Is enough of this input available where medical colleges are planned? There have been reports of dead bodies being unofficially removed from one medical college to another.

According to The Times of India Dr. G. Vijayaraghavan, former head of Cardiology Dept., Trivandrum Medical College and a highly respected doctor has stated that we would kill the medical education sector with more colleges like the ones which are planned.

Who cares? The Minister for Health is keen on getting a second medical college in his constituency. The foundation stone for this is being laid on May 19. Forget about half-baked doctors. Votes are what matters.

Note: The logo at the beginning of the post is that of the prestigious Trivandrum Medical College. Source Wikimedia Commons. Author: Aasemsj.
This file is licensed under the Creative Commons Attribution-Share Alike 3.0 Unported license

Posted by Unknown at 3:58 PM No comments: