Apologies for AWOL, rains in Cochin

For a few months now I have not been paying due attention to my blog. It has been a kind of absence without leave. Some of the regular readers have been kind enough to write to me about it. My apologies to them, and to those who made comments on my posts and did not receive any response.

For the last few weeks I was in Kerala. This was my first trip after the cardiac bypass operation I had in September 2009. I did not even touch a computer there. It was a time of getting together with the family and friends, visits to the club, and attending a few functions. Had a lovely time.

Chennai and Kerala are, as you know, in different weather zones – sweltering heat at one end and pelting rains at the other. Singing in the rain was not on cards. Neither was walking in the downpour without an umbrella. But it was nice being driven around. At the moment the roads have smooth surface. It is likely to be another story after the monsoon. Good while it lasts.

Olavipe, my home village is all green, just like the rest of Kerala. But it looks better on TV. Last week an interview with my younger brother Hormis Tharakan (former RAW chief) at Olavipe was on the mini screen and the place looked great.

An equally alluring spot is the beautiful riverside house of a cousin, Mathew Manipadam, at Udayanapuram near Vaikom. For the first time in my life I saw yellow hibiscus flowers there. I was really stunned by it. A couple of photos I took of them are reproduced below: 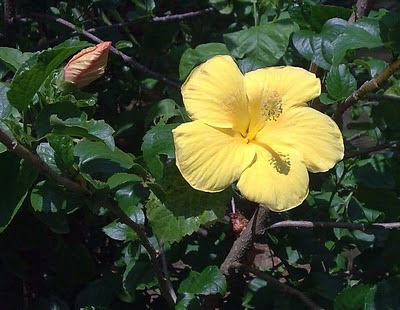 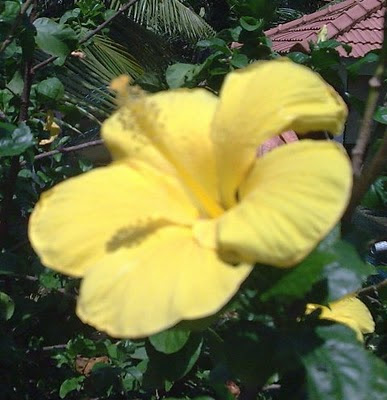 The construction activities in seem to be slow. Probably the reason is the heavy monsoon. A friend who is in real estate told me that there are not many land transactions. The rates quoted are high but very few deals are concluded. One can see a number of buildings in various stages of construction. Some have prominent “For sale” boards. It is also said that lack of clarity in the new land registration rules discourages land transactions.

Given here is a photo of a building I liked. 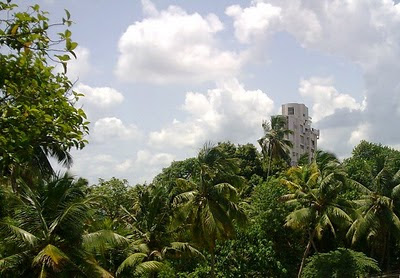 The structure looks beautiful, rising from the cluster of trees. Imagine it is in a city!

still has a number of coconut palms. Here is the picture of a high yielding one. 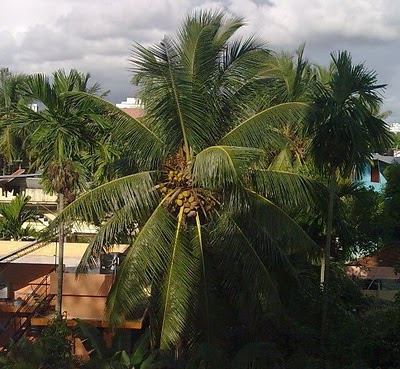 Such trees are not common in Kerala these days. Not much care is given to them. The main reasons for this are (1) it is difficult to get workmen, (2) the wages for unskilled labour is around Rs.300/day, (3) those who climb the palms to pluck the nuts are very few and charge heavily, and (4) the prices the farmer gets for the nuts are uneconomic.

The next is the picture of a special variety of coconut tree from Manipadam house. I believe that it starts yielding in 18 months! But the oil content in the kernel is low. Therefore it is not a commercially viable proposition. 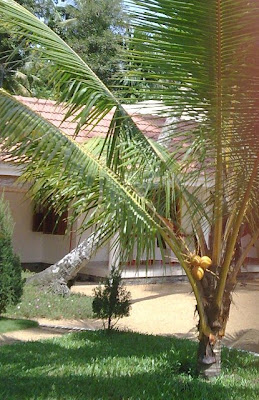 Kerala is slowly changing from the land of coconut trees to a concrete jungle. It is so sad.

Well, I am back in Chennai. The weather gods here are really kinder than they were last month. I am looking forward to keeping up my blog with regular postings.