The one who ran away

Karutha (Medicine men of Olavipe) had a son, Velayudhan who was a few years elder to me. He was a nice chap and, surprisingly, liked reading. I am grateful to him because he made me interested in books. He used to get me novels from Odampally Library about three miles away from the house. The library still exists.

Two of the books that I read initially, were Emerald of Mewar and Royal Ring. Both were Malayalam translations from Hindi. They were set in Rajasthan. I was fascinated by the stories and developed a great admiration for the Rajputs, especially Rana Pratap Singh.

Velayudhan was also in the army of house servants that we had those days. Once he was asked to clean the huge china jars. It was a chore that was done before the mango season started 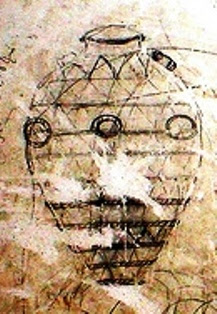 This image of a China Jar is on a wall document at Thekkanattu Parayil
From a photo by Medhekar.

He ran away to escape possible punishment. For many years no body had any idea whether he was dead or alive. He did not turn up for his father’s funeral.

One day somebody informed Ammachi (Oru Desathinte Amma.) that a sick stranger was on the steps of the eastern gatehouse. Elicheduthy, who was governess to the younger children, was sent to enquire.

It was Velayudhan, almost on the verge of death. In spite of proper allopathic treatment, good care and healthy food, it took months for him to recoup. After that he was back at work.

Then one day, for no known reason, Velayudhan disappeared once more, without telling anyone. He was never heard of again.

Why did he ran away second time? Who knows!