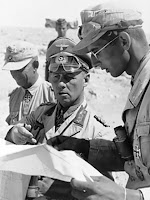 What General of the Army Eisenhower, the Allied Supreme Commander during the World War II, British hero Field Marshal Montgomery and the flamboyant American General, Patton, failed to do, was achieved by a doctor from Kerala, India. Or so he claimed (he is no more now). He arrested the great German general, Rommel!

1941-42. Desert War in Africa. Rommel’s Afrika Korps was battering the British. Our hero was a captain in the Medical Corps. After an engagement when his beaten unit withdrew, the doctor and a few of his orderlies stayed back to attend to the wounded.

Suddenly there was a flurry of movement. A fleet of military vehicles arrived, with a cloud of dust in its wake. The young medical officer looked up to see Rommel alight from one of the vehicles. The German commander had come to see for himself the result of the battle.

The captain realized that he was in trouble. After a moment of hesitation he walked up to Rommel with all the military élan he could command. He saluted, identified himself and said, “General [this was before Rommel was promoted as the youngest Field Marshal of Germany], Sir, I’m taking you as prisoner of war under the [appropriate provisions of] the Geneva Convention.”

Perhaps, for the first time in his life Rommel was rattled for a moment.

The doctor himself told me the tale while we were having a few drinks at my house, forty-five years back. It sounded like a structured yawn similar to one of those hunting stories. But I did not discount it totally, for valid reasons. I knew the doctor and some of his brothers quite well. The clan was always gentlemanly but could be tough if the occasion demanded it. Secondly, our hero was extremely intelligent. He had the presence of mind to realize that his only chance lay in doing something extraordinary and count on Rommel’s nobility.

That was precisely what happened. Rommel recovered quickly and said something to the effect: “You are technically correct. But there is a small problem. You have to escort the prisoner back to your camp. Are you in a position to do that?”

The young officer had to accept the logic.

Rommel gave him safe passage and helped him to get back with his wounded.

The moment in history had come and passed. Unfortunately there was no senior Allied officer on the spot to record the event and mention it in dispatches. Perhaps Rommel’s papers, some of which, I believe, are yet to be discovered, have a note about this episode.

This makes for interesting reading. A little far fetched and incredulous, perhaps, but who knows.

Nice to read your blog and the lovely details of the old times.

I have always been saying that people should write about what life was earlier sot hat the present generation could understand how life was before "today".

This comment comes from my infrequent blog at www.blogger.com, which is merely for the purposes of overcom,ing the rather naive comment posting rules of this blog site.

Otherwise, my choice of a blog is at
http://ezee123.livejournal.com/

A small error on the html details of the photos site.

The correct address should read as follows --