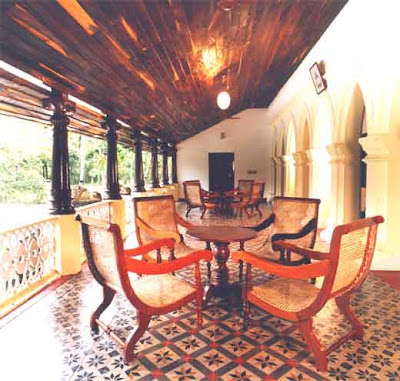 The tiles on the front veranda of Thekkanattu Parayil (picture on left), are vitrified, which means that the design runs right through the thickness of the flooring. Even with wear, the pattern will remain the same.

While the tiles were being laid, the then Palace Doctor at Trivandrum, who was a friend of grandfather (PM Avira Tharakan), visited Thekkanatt. He was fascinated with the tiles and wanted to procure some for a room in the house that he was building. They were not available in the market. Graciously, grandfather sent him some from the stock meant for Thekkanatt. This resulted in a shortage. That is why there are no tiles towards the southern end of the front inner corridor.

How grandfather got the tiles in the first place is interesting. Those days the waters in and around Olavipe were infested with alligators. There were big saltwater crocodiles and smaller muggers. Even now we can see on our lands solidified droppings of these reptiles, which are descendants of dinosaurs.

Sahibs from Cochin used to come down in big rowboats to hunt the creatures. I am told that, apart from the sport and the value of crocodile skin, the tails of the beasts with its stored up fat was a delicacy. The white men of course took no permission from the landowners. Grandfather didn’t like people, sahibs or otherwise, trespassing on his properties. Discreet warnings were given a couple of times, but the hunters paid no heed.

The next time a batch came for the shoot and was out on the embankments of the paddy fields looking for crocodiles, their boat and crew were taken away under grandfather’s orders. The hunters had no transport to get back to Cochin. Finally, they went to Thekkanatt.

What awaited them was a fabulous dinner with the choicest of wines and liquor. The house that was full of invaluable antiques and curios, and grandfather’s collection of guns impressed them.

At that time the construction of the front hall had started. It was added on after the main building was completed. The reason for this was that the house appeared too tall. The lean to was decided upon to tone down the front elevation.

The sahibs went back to Cochin after what certainly would have been an enjoyable evening with the famous Parayil hospitality. Couple of months later they sent a consignment of tiles for the front veranda as a gift.

Taliat Ammai (the elder among Appan’s two sisters) told me this story. But I heard later, though not directly, that Narayana Kaimal who had joined our service during grandfather’s time and was our chief manager for several decades, thought that the tiles were bought from P. Orr & Sons, Madras (now Chennai).

Well, alligator connection or not, the century-old tiles look beautiful!
·
Posted by Unknown at 8:36 PM

What a great story.

India is such a beautiful country. My grandfather was there during the Second World War, (British Army). He is so fond of the people and the country.

Thank you Claire. You'll find a lot more stories about India on my blog.