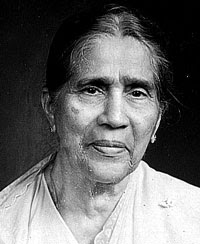 Ammachi was born into a prominent old family near Palai, in the foothills of the Western Ghats of Kerala. Her father, late Mr. KC Abraham (Kallivayalil-Konduparambil) was perhaps the largest landowner in that area He was one of the first Indians to venture into organized plantations.

Ammachi was married at the age of fifteen. And from the mountainside she came to Olavipe, into the lap of the waves. She lived at Thekkanattu Parayil, the house that her father-in-law (who had died before her wedding) had built, for 71 long years. She gave birth to fifteen children. Three died young. She brought up the remaining eight sons and four daughters and lived on to see all of them well settled in life.

Of the many things that I remember of Ammachi, one stands out. When Appan died I had to temporarily break my career and attend to urgent matters at home. There were Income Tax arrears, Estate Duty, and Gift Tax (Appan and Ammachi had gifted some of their properties to the children to meet education expenses) to be paid. And we were facing a cash crunch.

One morning Ammachi asked me for Rs.500. She said that the marriage of a Brahmin girl in Olavipe was fixed but her family was short of Rs.500 to pay the dowry. That was not a small amount in 1959. I explained about our financial difficulties but Ammachi insisted, and the wedding took place as scheduled. That was the kind of compassion she had. The tax problems were sorted out in due course.

Sunday Herald (Sunday edition of Deccan Herald, Bangalore) dated September 18, 2005 carried an article about Ammachi by Shiela Kumar titled ‘Beneath the wings of a ministering angel’. It focused mainly the exemplary way in which she had brought up her children. The following quote from the article is revealing: “Of course, differences tended to crop up [within the family] from time to time. This was a family of humans after all, not potential saints. However, at times such as these, her clear-cut rules held strong. She had instilled it into her family that they were all part of one entity and how, for that entity to function well, it was essential for all to pull together, harmoniously. Love conquers all, she repeated over and over again and soon, the clan had absorbed that dictum. Soon, they also found love did conquer all differences or at least, made it fade away into insignificance.” Even today, when Ammachi’s great-great grandchildren are growing up, the family bonds are strong and active.

Ammachi’s domain extended far beyond her immediate family. Many relatives, institutions, and common people benefited from her counsel, compassion and generosity. She was, in fact, ‘Oru Desathinte Amma’ (mother to a land). The thousands who attended her funeral demonstrated the respect, love and affection people had for her.

The House That Grandfather Built.