Ara means an enclosed storage area, often used for threshed grain – paddy in the Kerala context. Landlords who owned and cultivated large areas would have such storehouses near the fields and also an in-house granary to stock un-husked rice for home consumption.

In many old houses the ara faces the entrance as you can see form the photo from our ancestral home shown below. (The decorations are because the picture was taken during the engagement ceremony of my niece Tanya) 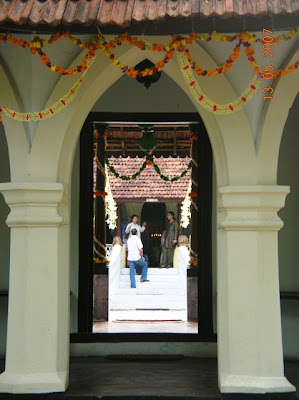 This shot by KO Isaac is from the eastern gatehouse. The door of the gatehouse, the entrance to the main building and the door to the ara (in the background) are all in one line. It has something to do with thachusastram (vasthu which means the traditional science of architecture.)

The door opens to what we call aravathukkal pura, but more commonly known as arappura in Kerala. It is a corridor which has doors to the left and the right leading to the other parts of the house and the entrance to the ara (see photo by me below). It is again in line with the front door. 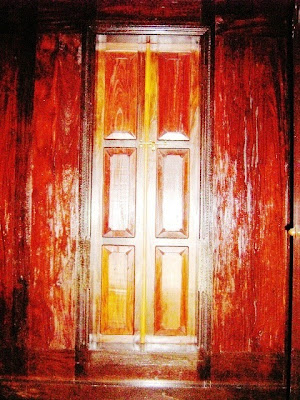 Our ara has two compartments. The smaller one is for nurukkari or table rice and the other for nediyari or coarse rice for the house staff. Now both are empty and we buy rice! Ten years back I stopped paddy cultivation which we were doing regularly, because the Communists imported some outsiders to plant red flags in our fields. They did this alleging that we were leaving our fields fallow!

There is a true anecdote to this. The party men who came in a truck and started a procession called our workers who were transplanting rice saplings in another field to join them. One woman stood up and answered, "Comrades, flags don’t produce rice.” Remarkable, I must say.

Coming back to ara, the entire structure including the floor is in wood. The reason for this is that paddy might spoil if it gets into contact with lime or cement. The ara is about three feet above the floor level of the rest of the house. I suppose this is to prevent permeation of moisture.

Traditionally, ara was taboo to women. They could stand in the arappura and carry away the grain measured out by men, but never step inside the ara!

Your article is very interesting. I was brought up in Mysore and had very
little knowledge of the kind of architecture the heritage homes had in my parents' native villages in Tanjore district.
An occasion arose when I accompanied my mother to see her heritage home for the ffirst time. With some slight variations in details, what you describe fits with the architecture of my mother's heritage home. It was very interesting to see the processes in operation between the paddy fields and the home. After the grains were separated and were piled up as heaps in the paddy fields, they were carefully asssesed to determine which heaps were for daily consumption ,and which were to be used as seeds. The latter was adjudged as superior quality grains. The room in which they were stored was exactly as you describe except that wooden planks were used as platform on which the bags were piled up. Two such platforms were created and a wooden partition separted them. My uncle used to explain to me the benefit of using the wood. The back of the partition contained bags of above precious seeds which were not touched until the time arrived to plant them . My uncle's lands were situated near the furtile cauvery delta, and he often boasted that the quality of the seeds and the grain he used for daily consumption were superior to those of other landlords!! As you say, the store room where the grains were stored was a 'male territory' and I as an young lad of ten was allowed to walk inside the store room , where as my grand mother, a woman of immense life experience was not! I saw similar store room in my father's heritage home and similar kind of practice of keeping the women away from this room. It was a very strange but a valuable expereince for me. Whenever opportunity presented I opted for such visits (forsaking opportunities to see my other uncle in Bombay!) to take part in the actvities associated with the store rooms of my parents' heritage homes!! My school mates in Mysore thought that I was crazy in shunning visits to Bombay, and opting instead to go to a godforsaken village in Tanjore district for some unknown reason!!

Guru thank you for the interesting comment. I would like to elaborate three things:
1. 'Vithu' (seed) was always given special treatment and kept separate all the time. To start with, they were sun dried for longer time than the paddy meant for consumption.
2. The platform is there in our place as well. The floor of the 'ara' is about about 3 feet higher than the rest of the house and serves as a platform.
3. The type of rice cultivated in each locality may be different. Therefore the procedure may also vary.
I may do a post, at least for the information of the posterity, about the cycle of paddy cultivation. It was something fascinating - the story of a bygone era.
Actually, my prize-winning short story Morning After the Storm - Part 1. in the blog Short Stories By Abraham Tharakan covers much of it.

Other terms that may make this more familiar - Nellara or Nell pathayam though pathayam can end up as a big boxish trunk.
yup we have one like this in our main tharavad at pallavur and of course at the cement para where the paddy is treshed. That is where the main pathayapura is located. we still do paddy farming even though people like gouriamma have stopped!!

and i forgot to add, the door itself was located about 2 feet or more above ground level with many horizontal drop down planks rather than a two halved door in our nellara.

You're right Maddy. 'Nellara' is the more appropriate term but for short we call it 'ara'.
'Nellpathayam' as you mentioned is a large wooden box. There is also 'nilayara' which is a cellar.

Dear,Friend
Kerala is a situated on the southwestern tropical Malabar Coast coast

of India. The state borders Tamil Nadu and Karnataka to the east and

northeast and the Indian Ocean islands of Lakshadweep and the