My friend Sushil (Jacob Matthan) of Oulu, Finland said in a recent post Two faces of sport in India on his Blog Seventh Heaven ‘My interest in hockey, especially to be a hockey goalkeeper started in 1952-53 when I was a 10 year old living in . I used to live opposite the St, Joseph College Hostel and sports grounds.I had many friends studying in the college. One was a guy called Abe Tharakan. He was the hockey goalkeeper for the college. I used to watch the team train and watched all their games. Abe inspired me to take up the game and the position of goalkeeper after I moved to in 1954.’

Sushil played hockey for , and St. Stephan’s, where Arun Shourie was his captain, and also in . On his mention of ’s playing fields, a whole lot of memories came flooding back to my mind. I have played hockey on many grounds in but this one is special in several ways. May be Sushil did learn something from me. But he had as his school (Bishop Cotton’s) coach RJ Allen who kept goal for in three successive Olympics – 1928, 1932, 1936.

I am also reminded of many a player of the 1950s. Some were internationals, and others, though good, were confined to the local circuit. My first captain at ’s, Ponnappa was a bundle of hockey wisdom, a top class left half, and a good leader. Unnikrishnan of HAL was perhaps the best centre half who never played for . McBride, again of HAL, was a solid back. He later coached the ’s School team and my two sons, Joseph and Abraham were among the beneficiaries.

Two very good goalkeepers in were Olympian Deshmuthu, and Dicky Armstrong. Deshmuthu stuck on with HAL. He had occasional lapse of concentration and Laxman was preferred for ’s playing eleven. Those were the days when hockey goalkeepers had no protection except for pads and abdomen guards. During 1957 Bombay Nationals when I was holding the citadel for Kerala against the mighty , Laxman come to the goal post and gave me a pair of gloves. That was a gesture which I can never forget. Probably that helped me to give a performance which the great Dyanchand reportedly called the finest he had seen.

Armstrong shifted to where also he excelled. His brother Billy was a planter, and a regular at Mundakayam Club. We used to meet for years, whenever I went to that club. Billy too was a fine man.

Among the teams, HAL which had all the stars and glamour, and the Army team, Madras Engineering Group (MEG) a well oiled hockey machine, were the top ones. ’s were almost there with them. We had a ’s Sports Club which included some old students also. was the moving spirit behind that venture. I have never come across a person who loved hockey so much; it was his life. He was a good player as well. He is fondly remembered.

I invite you to read Captain of the St. John's Team

at Short Stories By Abraham Tharakan. 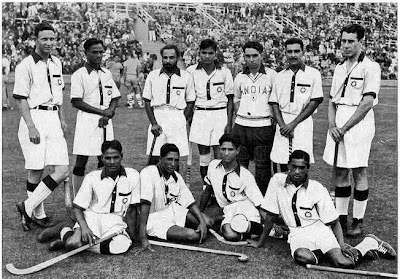 Olympic champions, Berlin - 1936
Photo: Public domain - Wikimedia Commons.
Ends.
Also see:
The Bangalore that was, 60 years ago!
Gunboat Jack, a Bangalore hero of the past
Bangalore Memories: Cricket, hockey and the traged...
Bangalore memories
Posted by Unknown at 12:26 PM

What a great post. Took me back in time. Yes, DJ Allen, Indian goalkeeper, was my PT Master and also helped me with my hockey, but I took to goal-keeping only after watching your performances.

Those skills were honed in Bombay by a one Mr. Pande and then at Delhi University where I played alongside several Indian internationals.

What a wonderful thing is this feeling called nostalgia!

pleasant to read about hockey during 1950s. my father francis played during the same period for mysore state with mcbride, deshmuthu, naidu, dcruz and host of other greats.
he always mentions that mcbride was the only captain to wing the beighton cup at calcutta and the only reason to not represent india was due to glasses he wore.

should you require a photograph of the 1950 mysore state team . I could post the same.

my dad francis was an inside right who played for 505 commmand workshop bangalore.

should you be intersted i could carry more ancetodotes from him

Our sport-playing days are always memorable. It's nice you have put it down! My grandfather was a great all-round sportsman, having played hockey too. But tennis was his greatest passion and was a renown champion, of whom they say he was unlucky to move higher because it required other 'ingredients' [which he lacked]. His prime was probably in the 1920s. Hockey never came to me, but cricket probably ran in the blood. I've a blogpost tracing something on this, written sometime ago.

It's great two of your old friends have responded to this post.

Dear Sir, It was an absolute delight to have across your blog. I remember from my Dad, who studied at St. Joseph's and then worked for HAL, of the glorious days of Bangalore hockey. While I belong to a different generation, I am still in awe of the great accomplishments of those hockey greats. Thank you very much for this post.