Sounds strange, doesn’t it? But it is true, at least in my part of the world. I don’t know whether such a system exists in other areas of Kerala.

When coconut plucking is on, if a passer by asks for a karikku (tender coconut) he usually means a mature coconut. Only a poor man would make such a request. A whole nut without de-husking is always given to him unless there is some compelling reason to refuse. That is the convention. The supervisors in charge write it off in the ‘charity’ column of the concerned register.

But if a karikku is to be given to a person of a slightly higher class, the husk on the top of the tender coconut would be chopped off. For the higher class, more of the husk would be removed. That makes the karikku lighter and easier to hold.

But for the ‘House’ (meaning the land owner’s abode) the entire husk is removed. It is more convenient to handle, but can be a bit sticky on the outside unless one waits for it to dry completely.

Given below is a photo by PJ Antony Tharakan showing the three different types of presentation of karikku. Read from right to left: Regular, Deluxe, Super Deluxe. 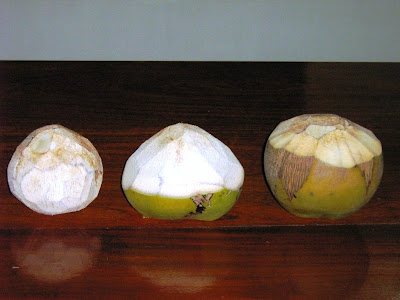 
Only the containers differ in appearance. The content is the same, the finest natural health drink in the world. You can take it from a glass as well, nullifying the ‘class’ effect. But then, some like the tender coconut water dripping down the chin on to the clothes.

Whichever way it is consumed, tender coconut water is good for you, particularly so to get rid of a hangover.

Hi Tharakan;
This article made me think of my college days, (I am from a much younger generation) inspired by watching the popular malayalam movie 'Devasuram' , we used to treat 'Karikku' as an one medicine fits all (ottamooly..). To get the hangover effect, and get rid of it.
Indeed Karikku is the best cocktail mix for any hangover inducing beverage,minus the on-the-rocks-(neat) drinking by the more experienced.

Kariyachan, you are right; 'karikku vellam' is an excellent cocktails mix. For on the rocks 'karikku vellam' can be frozen into cubes. Haven't tried it though.
Devasuram was a good movie. I did a post in which it is mentioned - Malayalam cinema: Random Thoughts.
You can access it at:
http://parayilat.blogspot.com/2007/10/malayalam-cinema-random-thoughts.html

I will defenitly give it a try( frozen cubes of karikkin vellam) next time wheh I am in Kerala.

Devasuram movie is one of my personal favourites, since it paints a realistic picture of the much mis-understood and criticized feudal era.

By the way, Tharakan, I am really impressed and inspired by the contents of your blog, especially your memoirs of child hood etc, that I have created a blog of my own.

And lastly, my mother is from the same area as you, I am the grand son of P Chacko Madathiparambil. He used to teach at SMSJ High School.
Every time when I visit your blog, I feel a nostalgic smell, that of my child hood vacations in Thykattussery area, and those mellow memories of my late grandfather.

kariyachan, thank you for the nice things you have said about my blog. I plan to visit your blog soon.
Happy to know about your Thycattussarry connection. Chacko Sar joined SMSJ School after I left in 1946 when it was a middle school.
Another grandchild of Chacko Sar, Teji from Gulf area, made some comments on my blog. You can read them at:
Kerala Architecture: Nalukettu, ettukettu, pathinarukettu
http://parayilat.blogspot.com/2007/08/kerala-architecture-nalukettu-ettukettu_13.html
Do keep in touch.

My drinking days are long over, gentlemen, so I cannot try freezing karikkin vellam (elaneer vellam as we call it)...

BUT I still have a thick meesha twirled up at the ends a la Mohanlal in Devasuram so some small consolation.