Boxing: ‘Tiger’ Nat Terry – a champion and a gentleman 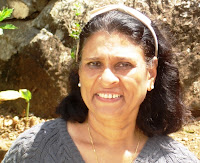 Sheila Abraham, Nat Terry’s only child wrote this touching memoir. She was junior to my wife Annie (Tharakan nee Abraham) in Sacred Heart’s, Yercaud (SHY). Annie & I once called on Mr. Terry when our children were at SHY. It was a pleasure meeting the legendary man.

Sheila and her husband Ramsay Abraham stay at Fathima Villa, the house that Nat built. They have two children, Ramsay Jr., and Marise and three grandchildren, Shayna, Joshua and Nathaniel. I am grateful to Sheila for writing this at my request. - A.T. 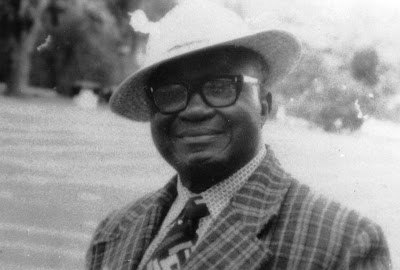 Nathaniel (Nat) Simon Terry was born on 3rd July 1913 in the small town of , Kolar Gold Fields, . With his great sense of humor Nat used to say he was 16th born to his parents but 17th in number; there was a pair of twins among the siblings. His father, Andrew Terry hailed from . He joined a ship and landed in and married Angelina Jones. She was also of West Indian origin but born in .

When Nat was only eight, his father passed away. Angelina then shifted to (Chennai) with her children. Nat joined St. Patrick’s School. He participated in several boxing tournaments under the name ‘Kid Joe Berg’. He didn’t win any, but kept on improving with every bout. Later he changed his name to ‘Tiger’ Nat Terry.

After studies Nat joined Richardson & Cruddas as a trainee structural engineer. But he shifted his line and enrolled in the Madras Guards A.F. in 1938. He was posted at Fort St. George. Nat married Beryl Eliza Meyer of Thomas Mount on the 29th of March 1939. They were blessed with a daughter, Sheila Josephine in 1944. When discharged from MGAF in June, 1946 Nat was Warrant Officer and a qualified Boxing & Physical Instructor as well.

Major Willie Rahm who was Nat’s Commanding Officer at MGAF recommended him to Br. Eleazor (Tich), the then Principal of Montfort Anglo Indian Boys’ High School, Yercaud. He was appointed as the Boxing & Physical Instructor and Study Master of Montfort in 1946. When the school started an NCC Wing, Nat was made its First Officer also.

Beryl too joined the school staff as Matron. She and Nat made their home at Yercaud. First it was Cottage Constantina (Marley's Cottage) where they celebrated their only child Sheila’s third birthday. Then Glen Brook. Finally, in 1950, Nat built his own home, Fatima Villa, on .

While he was at Montfort, Nat’s boxing career rose to great heights. There was a string of victories over well-known opponents like the Suares brothers, ’Dusty’ Miller, ‘Kithery’ Muthu and Murugesan. Then he scored a historic victory against the ‘unbeatable’ Gunboat Jack. Shortly after that he won the title 'South Indian Boxing Champion' in 1949 - a crown which had not been wrested from him.

However, it was at this match that Nat, to some extent lost his zest for boxing as the other contender for the title, Mr. Arunachalam, lost his life in the ring. Nat always recalled this tournament with much regret. While defending his title for the next few years, he did not try to further his boxing career at the All India level

While all these were happening Nat never wavered in his efforts to meticulously coach his trainees at Montfort. He ensured that the young boxers did the school proud. To name a few of them - Brian Chapman, Paul Wilson, Renee Pears, Blair Williams, George Edwards, David Sundaram, the Tong brothers and P. Joseph Abraham.

Beryl passed away at the age of 56. That was in 1972, the same year that Nat retired from Montfort. Though lonely after his dear wife’s demise, he was blessed with a number of visitors who would call on him and this made up for his loss. Nat was simple in nature but had a strong personality, which wooed many people, young and old, who would spend hours listening to his boxing experiences and his life as a whole.

Nat loved people and he had friends in all walks of life. Music and dancing were his passion. He was a great Tap Dancer and the life of any party or get-together, as he loved to sing and entertain the gathering. He was affectionately known to all as ‘Papa’. 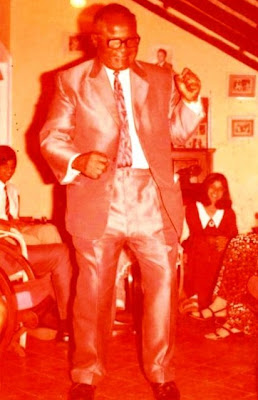 On the 23rd of January 1998 Papa passed away very peacefully at the age of 84 at his beloved Fathima Villa. May the souls of Nat and Beryl rest in peace.

Photos: Copyright Sheila.Abraham. Click on them for enlarged view.

Also see: Gunboat Jack, a Bangalore hero of the past

I remember Nat as a good person with a kind heart. When so many weak people act tough it was an inspiration to find a truly strong person who was so gentle and cheerful. I recall a prank I once played and his never showing any anger. Truly a special person and we can all learn from his qualities

Rest in peace Tiger..you made a man out of the timid, shy, defenseless boy that I was.

My nose still smarts from the light blow you gave me on my nose when I let my guard down the first day I met you. That was a lesson learned very well.

Still recall fondly your worldly advice to me on my last day at Montfort..

"You're going into the big world out there my son, you need to learn a few things" you said and spent the next hour teaching me how to take care of myself in difficult situations.

Thanks to you, I can look any man in the eye and hold my shoulders erect.

They don't make better men than you..

Thanks for the comment, Maddy. Gunboat went back to his homeland. Tiger was born in India and died in India.

In the course of my research into the Anglo-Indian community and Bangalore, I came across your mentions of Gunboat Jack and Nat Terry - and also happened to see a reference to Nat in Owen Thorpe's book Paper Boats in the Monsoon, which described his time at Montfort (among other places).

Such a great blog! Thanks Abraham!

I did post this in Montfort facebook.. I guess you are ok with that.. if not my apologies and I will remove it
Thanks
\Pau;

Hi.. I did give a link to this post in Montfort facebook page, when someone was curious about Nat Terry. I am sure you ok that that.. if not let me know I will remove..
thanks
\Paul

I met Mr Terry "Nat" as he was lovingly called as a 8yr old boy in Montfort.
He was larger than life, not just because of his frame but more so his personality - gentle, charming, full of humour, caring and he had time for you, no matter how tiny or insignificant you were.
His hallmark were his suits, glasses, french hats and walking stick.
He was still coming to the "boxing room" some 30 years after he had officially retired and coaching. make no mistake even at that age if he felt you were out of line, in a flash he could give you a nip and you would feel lightning struck as one too many senior boys who tried their luck with "an old man' found out.
He didnt ask for anything. He gave his encouragement and warm smiles.
I knew that he was unique and now i understand why he moved so differently from others - his heritage/roots.
Nat was definitely one of a kind to have visited planet earth and i am glad i was privileged to have been touched by this a.m.a.z.i.n.g. being.
That he touched the lives of many is not extraordinary for that was his "suchness", his 'isness". That he will never be forgotten for generations to come is beyond doubt.
Truly he was great - for being born ordinary he lead and E.x.t.r.a.o.r.d.i.n.a.r.y. life.
Here's to you Sir Terry !!!

I have tears in my eyes reading the comments. Thank you all so much. My Papa would have been so touched to read this. He's probably smiling down at us all, right now.... My Papa, My Teddy bear! (that's what I called him as he was the most huggable person ever) PURE LOVE...

Thank you, Mr. Tharakan and thank you all for your very real and touching comments. I am Mr. Terry's grand daughter and it brought a tear to my eyes to read of the impact he had on your lives and the affection that you still hold him in. My Papa would have been humbled by your generosity. THANK YOU!

My Papa was the most gentle, generous, patient, humorous and loving man that I've ever known. I called him my 'Teddy Bear' as he was absolutely delicious to hug and he called me his 'Doll'. I miss him and will continue to miss him for always...

Reading this blog makes me feel a little unfortunate. Back in my days at Montfort, we were always remembered off a legendary Gentleman (Boxer) that grazed the premises whilst making an ever lasting impression on everybody he came across. I have never met Mr. Nat, but still feel proud of the distant connection I share with him through Montfort. Reading from the above experiences, I can only say that you have brought much joy in many peoples lives and for that I salute thee.

Cheesy Voltaire, Marise Abraham-Lee, KavinK3, Thank you all for the nice comments.