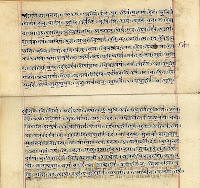 I had started writing this about eight months back, but somehow missed completing it and publishing. What prompted me to take up the subject was a report in the New Indian Express of June 22, 2007, which contained a statement that Vedic Pundits were not permitted to learn English

Many of you, I am sure, know more about the Vedas than I do. Nevertheless, a brief note on the basics. The four Vedas - Rig Veda, Sama Veda, Yajur Veda, Atharva Veda - are the primary Sacred texts of Hinduism. Buddhism, Jainism and Sikhism are also greatly influenced by these scriptures.

There is a difference though. Hinduism considers that the Vedas (which means knowledge) are not human compositions but Wisdom that was ‘struti’ (heard). In other words they are Revealed Wisdom. The other religions mentioned above do not seem to concede the divine origin of the Vedas.

Different views are seen about the period when the Vedas came into existence. Wikipedia quotes Radhakrishnan and Moore: “The Vedic Period is dimmed by obscurity, but it may be placed between 2500 and 600 B.C.” It seems to be generally accepted that the Vedas were present in oral tradition long before they were reduced to writing.

The Vedic chants were always in Sanskrit. Therefore, the Pundits had no need to learn English. Whether there was a specific ban on them studying the foreign language/s is not very clear.

The Syrian Christians (Catholic denomination) of Kerala were discouraged or banned in the 19c from learning English because it was, at that time, considered by the Church hierarchy to be the language of the Protestants. Another restriction for this community during the same period related to Carnatic music because it invoked Hindu gods!

But historically, the theology and philosophy of the Syrian Christian community of Kerala had a strong root that could be traced to the Vedas. There was no conflict, That was not surprising. According to the great scholar, Father Bede Griffiths of Kurisumala fame, the Vedanthas are the greatest source of natural theology.

Ends.
Also see: History of conversions to Christianity in Kerala – an overview

For a start, Wikipedia is not a serious reference. We academics discourage it as a source as the information about any topic is not refereed for authenticity.

It is not surprising about wisdom passed by word of mouth. The story of Christ was passed on to a few generations by word of mouth and only after two centuries after Christ written form appeared.

A few I know including my father knew English, and I who learnt Sanskrit, Veda and Upanishads under him was not prevented from learning English at an early age. It was said by my father and others that the late Shankaracharya of Kanchi who was held in high esteem for his erudition understood English when scholars from the West visited him and spoke with him. In his previous life,he stood first in the class at school for his knowledge of the Bible. Learning Sanskrit is an ardous task by itself. It takes years to be proficient in Sanskrit. Its grammar is difficult as it was the language of scholars at that time. Similarly it takes more than a decade and a half to learn one Veda which task is compounded by the fact that Sanskrit is language of Vedas.

About English learning. English arrived in India very late in Vedic age terms. I do not know or have read any
Vedic scholar of repute discouraging learning of English. The impact on Hinduism and on Veda was mostly felt at the Moghuls period. Moghuls and Islam changed so many institutions obliterating the great treasures of knowledge ( Vedas and Upnishads)built before that time. .

About Sikhism. Sikhism originated taking bits from Hinduism and Islam. Their sacred text 'grant' hence is not based on Vedas alone.

About divinity. Very few know that Budhism is atheist in concept and does not beleive in a superior being, God, but worships Buddha. Jainism is somewhat similar. There was always tussle between Vedic scholars and Buddhists in those times as the latter did not believe in divine power which Vedas accept. Indeed, Kaladi Adi Shankara, it was said took birth to re-establish Vedas and Upanishads as sacred texts, the former devine in origin, when they took battering from Buddhism for a long time.

Hi.. Thanks for this informative article. I really liked it. I also came across this similar site with nice articles and videos on vedic prinicples - http://www.vichaar.tv