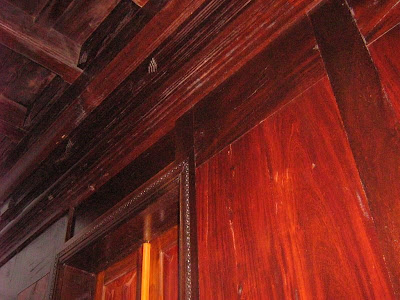 Why are the thousands of granaries in Kerala lying empty? An explosive crisis has now developed in Kuttanad, one of the two major rice growing areas of Kerala (the other is Palakkad). I explained some of the reasons for this in my post, Un-ploughed lies my land.

The immediate problem is that thousands of hectares of paddy in Kuttanad cannot be harvested in time because of shortage of labor and lack of machines. The heavy summer rains have added to the predicament.

Kerala has been facing difficulty regarding rice, its staple food, for some time now. There is an acute shortage and the prices keep rising. Imports of paddy from states like Andhra Pradesh are tapering off due to various reasons.

Local farmers who valiantly try to cultivate either their own or leased land, are in a miserable situation. Reportedly, this season at least two farmers of Kuttanad have committed suicide because they had invested heavily but could not harvest the crop in time.

Why doesn’t Kerala have essential machinery for successful agriculture? The unions (these are the people who fought against mechanization of coir industry and use of computers in offices!) wouldn’t allow them claiming that they would render agricultural labor jobless. Of course, resourceful farmers could obtain permission to use tractors and harvesting machines by properly petitioning the unions!

The ‘loss of jobs’ argument must be a joke today. According to reports, unions claimed there were 15,000 agricultural workers in the area, but only 300 have so far registered in the Collector’s list of persons available for harvesting.

Now frantic efforts are on to get about 250 harvesting machines! Most Keralites would happily drive a tractor but wouldn’t like to get their feet dirtied in the slime of the paddy fields. So they look elsewhere for jobs.

In the 1950s Lambert Mascarenhas published a lovely novel about – ‘Sorrowing Lies My Land’. That title seems appropriate to today’s Kerala. Tobias, the protagonist in the book, says. “Husbands and sons must roam the world over in search of work so that they can send money home to keep their families alive.”

Even as I write this, unharvested paddy is sprouting to waste in the Kuttanad fields.

The photo (copyright reserved) of the granary (ara)in our tharavad is by me. Click on it for larger view.

One of my colleagues worked in Triivandrum at the University in a senior position. He used to enlighten us about the unions and their power 35 years ago- post Namboodripad government, and explained how they were good in chucking spanner in the works. Mechanisation has its flip side but used cleverly can produced tangible benfits. Even about 25 years ago when our plane developed fault, the pilot landed the plane at Oman airport, at the transit lounge, a gentleman from Kerala who owned a chain of recruitment agencies in Oman Dubhai, Qatar and Oman was saying that the lure of the Middle East and the opportunities it provided meant he recruited hundreds of workers skilled and unskilled every month and wondered about the depletion of the labour force in Kerala. Talking about labour force and agriculture,when HMT and BEL buildings were coming up in Jalahalli during late 1950s and early 1960s, the wages from construction companies were so attractive that the farm lands within 50 miles were deprived of manual labourerers. Indeed, the companies sent out dozens of their lorries to fill them with labourers and brought them to the sites. the Labourers preferred this as they knew they could find work for at least one year. To retain them the companies provided highly subsidised lunches prepared in huts which sprung up nearby and which also attracted dozens of cooks and workers. Getting messy in a paddy field has never been attractive. Once I joined with labiourers in my uncle's paddy fields in knee deep of water and mud slush and nothwithstanding taking bath with oil rubbed on to feet and legs every night, my toes became funny, feet and legs developed strange skin problems. Working in paddy fields is a very discouraging activity.