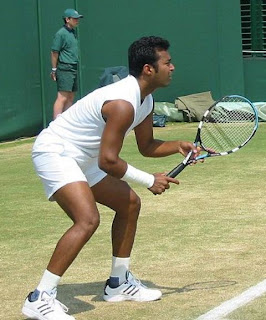 It is difficult to say where Leander Adrian Paes would stand if one tries to rank all the top Indian tennis players in history. But one thing is certain – Indian tennis never had an icon like him. He is the hero.

Paes was born on June 17, 1973 to Vece Paes an Indian Hockey Olympian and Jennifer who had represented the country in basketball. World took note of him when he won the Wimbledon Boys Singles in 1990 and went on to become the world number one among boys. Next year he bagged the US Open boy’s crown as well.

Mere statistics would indicate that Paes didn’t really achieve all that the nation had hoped of him in men’s singles though in men’s doubles and mixed doubles he continues to be one of the world’s top players. A podium performance at the Atlanta Olympics, just one singles title, a few brilliant victories like the one over Pete Sampras in the 1998 Pilot Pen International, career best ATP singles rank of 73. But he was always the man to beat, a fighter who would not give up till the last bullet is expended.

It is a different story in the Davis Cup in which Leander rose to great heights. On several occasions he beat players ranked much higher than him to bring India victory. He ranks fifth among the 4500 or so players who have participated in the Davis Cup since its inception in the win – loss ratio.

It is not just that. It is the manner in which Leander Paes performed. He gave each match everything that he had and often pulled back from seemingly impossible situations. He drove himself and went that extra mile. On 32 occasions in 40 Davis Cup ties Paes played two singles, and doubles. And 16 times he won all the three matches, carrying India to the next round virtually single handed.

It is amazing how this man with comparatively limited tennis capabilities has transformed himself into a real champion. The leadership expert Saurabh N. Saklani wrote an article about Paes in Businessworld captioned ‘Lessons from Leander Paes’ He says, ‘The Indian tennis ace is a great example of someone finding success within individual limitations’. You can read the full article at

Being presented as a business model does not mean that Paes is a money manic. At an age where most players would conserve their energies for the professional circuit and earn more, Leander’s first priority continues to be playing for India. He has been doing that for nearly 18 years now.

When India takes on Uzbekistan at Delhi on the 8th, Paes is not likely to play because of the injury sustained during the Australian Open. But he will be there, as captain, to lead and inspire his players.

Well, I am not sure where Leander Paes would stand in the rank, but he must be in the top three. Anyway, wherever it is, the main thing is that he has flourished every bit of his potential and could get the best out of himself. It is true that he deserved many more success in ATP singles than he has won already.

However, whatever he achieved in his career so far is enough for being an idol to the young people. I think, Leander Paes should continue his career few more years as he seems to be fit enough to take on star players.
Thanks for your interesting article.

he is a good fast volleyer and serves well in doubles, i was mystified when he got that strange & serious illness a few years ago eating some tainted mutton...

biplob kishore deb, I'm happy you liked the post. I think Keander will keep India's flag flying for quite some time more.

Maddy, I think it was in 2003 that Leander had serious helth problem.