Book Review: The Other Side of Laurie Baker 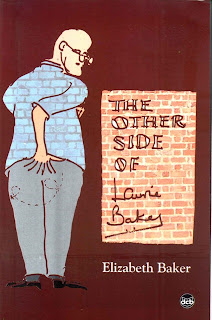 The Other Side of Laurie Baker by his wife Dr. Elizabeth Baker is a combination of mainly three things: reference material, biography fused with autobiography, love story. The achievements of Laurie Baker in the field of architecture, particularly low cost housing, are well known. But there was much more to the man.

This book presents so touchingly the long journey of Laurence Wilfred Baker (1917-2007) from , where he was born, to . Before this Associate Member (1938) of the Royal Institute of British Architects (ARIBA) fully settled into his profession, World War II broke out. He joined the Friends Ambulance Unit raised by the Quakers and was sent to where he worked with the suffering and the sick including lepers. Several letters of Baker reproduced in the book give a deep insight into the situation in and during the war years.

The book describes Baker’s 1944 meeting with Gandhiji in while waiting for a passage to . Gandhiji told him to return to and work in the villages. The man did just that. In he joined ‘The Mission to Lepers’ and was back in in 1945. He went to Faziabad and teamed up with Dr. PJ Chandy from Kerala who was in charge of the leprosy hospital there. The two became good friends.

Now the love story begins. Dr. Chandy asked his sister Elizabeth who was then the Medical Superintendent of a hospital in Karimnagar to visit him. Laurie Baker was sent to meet her at Allahabad Railway Station. On the last day before she was to return to Karimnagar, ‘He took my hand and asked – “Will you marry me?” There was no hesitation from my part because, from the beginning of our acquaintance I was quite sure that we had to be together. It seemed to me the most normal thing to do.’ There were objections but finally they were married in 1948.

From then to 1963 was the ‘Himalayan era’ working together in remote areas in the hills. During that period Baker did a great deal of architectural work mainly building schools and hospitals using locally available materials. Then they came to Wagamon, Kerala and built a hospital, Mithraniketan (see drawing by Laurie Baker) for the tribes in the area. Finally the Bakers shifted to and it was there that Laurie Baker’s trail ended.

The Other Side of Laurie Baker is an interesting and inspiring book, which has some photographs as well. It is published by DC Books, (Online Bookstore www.dcbookstore.com). The cover illustration is by Laurie Baker himself and the design by N. Ajayan. The 160 page book costs INR.90. 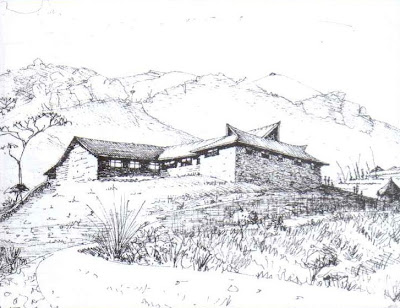 Baker & baker houses - they are so practical, my uncle has one and though it tends to be a bit dark (no plaster on the walls)the house met their budget demands and feels like a house rather than a colossal waste of time, effort & money (which is how it is if u look at the 'dubai' houses of kerala).

thanks for the post.i've always been a great fan of Baker.

I had been to Baker's house in Vagamon several times. That was beautiful and functional. If I remember correctly, Baker told he it (I think 6 bedrooms) cost him only Rs.14,000. That was incredibly cheap even in 1963.

The phrase 'Dubai house' is an apt one for most of the houses built by expatriate Keralites at home. In many cases they present an example of life time earning sunk in non-productive investment.

Good to hear from you again, Meera. Thank you.