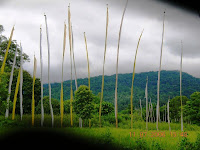 Prayer is man’s communication with God usually in the form of a petition or thanksgiving or simply glorifying the Almighty. It could be in word or in thought, written down and read, or formulated in the mind. It could be personal or communal. The rendering could be formal or conversational. One can pray at any time, at any place, in any manner though there are often set conventions like kneeling at prayer.

The Tibetan Buddhists have an unusual system of praying. They have what is known as Prayer Flags on which invocations, petitions, auspicious symbols and mantras are inscribed. This is commonly done by printing on thin cotton cloth with wooden blocks using non-toxic ink. The colors of these flags are traditionally yellow, green, red, white and blue. They symbolize earth, water, fire, clouds, and sky.

The Prayer Flags are either strung together and hung horizontally, or tied to poles and planted vertically. The picture above is taken by KO Isaac on a tour of the North-East. It shows upright Prayer Flags. Unfortunately I don’t have any images of horizontal flags, but one can find many photos of them on the Internet.

These flags can be placed inside buildings to augment the spiritual atmosphere, but the common procedure is to fix them in open, windy places. The belief is that the ‘Wind Horse’ would carry the prayers to all corners of the world and to the deities. Normally the flags are planted on windy, sunny mornings.

The conviction is that the prayers broadcast through the flags would bring health, happiness, peace and other benefits not only to those who display them but also to their families, neighbors, and all peoples of the world including enemies. Some believe that if a Prayer Flag is placed on an inauspicious day, it may bring negative results.

The Prayer Flags are now specially manufactured and made available to the Tibetan Diaspora around the globe and, I suppose to others who are interested, by some organizations. The flags are to be handled with due respect. They should never be placed on the ground or used as part of clothing. And if a flag is to be destroyed, it should be burned at a clean place.

Whether this system of prayer is accepted or not by others, one thing is certain. The very sight of the Prayer Flags fluttering in the wind on a hill slope gives a soothing, peaceful feeling.

An excellent read....I didnt know that such flags existed...Keep writing.Anu.