The interesting story of a remarkable man lies buried in the obscure pages of Kerala history. In available data, there is confusion about his name, nationality and designation. I understand that my brother Professor Emeritus PKM Tharakan in has an ongoing research project on this subject. That, when completed, should provide clarity.

I have chosen the name Delannoy from the versions of it given by different writers. Delannoy was part of, or commanded an assault fleet of the Dutch East India Company in early 1740s to Colachal (Kolachal). The objective was to capture the port in the south western corner of and the hinterland that was rich in pepper and therefore important to the Dutch commercial interests. Their adversary was the king of Venad who later became famous in history as Marthanda Varma Maharaja of Travancore.

The Dutch marines stormed the beach and advanced almost to the outskirts of the Venad palace. Then a surprise counter attack by the king’s Nair soldiers from the flank routed the Dutch. It is said that this was the first occasion when an Indian ruler defeated a western naval force. Delannoy and some of his men were captured alive.

The force that vanquished the Dutch had been raised in 1703 as bodyguards of the Venad raja. Today it is the 9th Battalion of the Madras Regiment, perhaps the oldest unit in the Indian Army, with uninterrupted service for over 300 years.

In spite of Delannoy’s defeat, Marthanda Varma was quick to appreciate the man’s military acumen. He offered Delannoy and his men freedom in exchange of training the Travancore soldiers in modern weaponry and warfare. Thus started Delannoy’s association of nearly 37 years with Travancore. Delannoy transformed the local army into an elite fighting force well-trained in the use of muskets. This contributed immeasurably to Marthanda Varma’s success in the several wars that he waged.

One of Delannoy’s great achievements was the designing and building of Nedumkottai, a 48 km long fort to defend attacks from the north. This bulwark was to play a crucial role when the forces attacked Travancore during the second half of the 18c.

There is no clarity about the Delannoy’s official designation in Travancore. Several writers refer to him as Captain. He was perhaps a naval captain at the time of Colachal War. He was made the chief of the state’s armed forces, whatever the designation was. With affectionate respect the people called him ‘Valia Kappithan’ which means big captain or admiral or great naval chief.

Delannoy’s status seems to have been that of a Nair Lord (madambi) or slightly above that. He stayed at the old Udayagiri Fort, which Marthanda Varma had renovated, till his death in 1777. It came to be known as ‘Dillanai ’ (Delannoy’s fort).

Delannoy sleeps eternally in a chapel at Udayagiri. His wife and son were also buried there, on either side of his tomb. 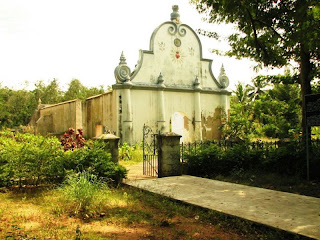 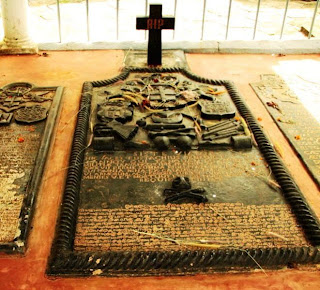 Photos of Udayagiri Chapel and the Delannoy tombs are reproduced under GNU Free Documentation License. Click for enlarged view .

Also see: Indian who could have been the King of France?
Posted by Unknown at 10:51 AM

I have been reading Giles Milton's historical book called "Nathaniel's Nutmeg" that mentions in detail about the Dutch East India company and how they were much hated in the Spice Islands (Banda, present Indonesia) and how ruthless they were. I found this article to be refreshing that an Indian king defeated tne vastly superior (or so perceived then) Dutch and that Dellanoy continued living in India and assisted the king. I liked this article very much, I hope your esteemed brother comes out with a book based on his research, I would be fascinated by it for sure.

This was an email that I had sent to a few people sometime in 2006 or 2007 after a trip to Colachel. I actually have photographs of the so called tombs of De Lannoy's horse (said to have been gifted to him by Sree Anizham Thirunal) and dog. Eustachius de Lannoy was Flemish, as I am sure your brother in Brussels would be able to confirm. There are also tombs of a few Englishmen as well in the service of the Maharaja. Please let me know if you need photographs of the Victory Pillar, the various tombs etc.

"Subject: The Colachel Victory Pillar - how we are condemned to forget our history.

The Vijaya Stambham or Victory Pillar, of Colachel, carved out of one piece of granite, was erected to commemorate the great battle that took place on the 10th of August (31st of July ?) 1741 between the forces of Travancore and a joint force of the Dutch navy and marines under the command of Captain Eustachius de Lannoy, which ended in the total defeat of the Dutch. This is considered the first instance of an organized Asian military power defeating a major European naval power, and marked the decline of Dutch influence over India.

The battle began when the Dutch forces landed with artillery at Colachel, then a small but important coastal town, intending to secure a trading post from the Maharaja. They captured the territories up to Padmanabhapuram, the then-capital of Travancore. The arrival of the Maharaja’s army from the north forced the Dutch to fall back and take up defensive positions at Colachel, where they were attacked by the Travancore forces. The surviving Dutch soldiers were taken prisoner, while the Commander joined the Maharaja’s army in return for his life being spared. Captain de Lannoy went on to be promoted as Senior Admiral (Valiya Kappithan) of the Travancore forces and served the King faithfully for over two decades. He established a fort at Udayagiri, about a mile and a half from the capital and lived there until his death in 1777, having retired from active service in 1758, the year the great Marthanda Varma passed away. The caretaker at Udayagiri Fort actually showed us what he claimed were tombstones of De Lannoy’s favourite horse and dog !

The key element of the Raja's army during the battle was his personal bodyguard, the Travancore Nair Brigade. This unit (raised in 1704) was later integrated into the Indian Army as the 9th Battalion of the Madras Regiment in 1954, and celebrated it’s tercentenary in 2004. His Highness the Maharaja of Travancore is hereditarily the Colonel of the Madras Regiment till date.

On a warm Sunday recently, we made a trip to Kanyakumari district to see Udayagiri fort (also called Dilennayi Kotta), Padmanabhapuram Palace, Dalawa Thampi Chempakaraman Velayudhan’s (aka Velu Thampi Dalawa) ancestral 16 kettu at Thalakulam (known as the Thalakulam Valiya Veedu) and last but not least the Colachel Victory Pillar.

At Colachel we asked a few people where the Vijayastambham was. No one knew and there was absolutely no signage. At one shop, a boy actually called the owner out – it seemed his (the owner’s) name was Vijayan. Helpful but didn’t serve our purpose. That worthy gentleman had not heard of the Vijayastambham either but when we said Victory Pillar, directed us towards the sea front. How silly of us. A memorial to a naval battle would obviously be on the water front.

At the sea shore, we asked yet another shop keeper for directions to the Victory Pillar (we had learnt our lesson !). We had passed it without noticing. Just across the road from where we were standing in front of a huge church, in a small plot of land walled in on the roadside but open to the beach behind, the pillar stood forlorn and forgotten. We walked in over the broken, rusty gates into the piece of land used as a urinal and garbage dump by the local public. The stench was unbearable. Here was that famous memorial to a feat of arms probably unmatched since then and later as well.

Truly, how have the mighty fallen. The district and state administrations, the archaeology department, the department of culture, even the Indian Army – isn’t there anyone who can correct this gross neglect of our past ? our history ?

A very interesting story. Thanks to the internet we are able to read such stories.

I reached this blog after a snippet in The Week mentioned that the Army celebrated the 268th anniversary of the Battle of Colachal.

I'm glad to hear that the Archaelogical Survey and the Army are now preserving the memorial.

Wg Cdr Joseph Thomas, Thank you for the comment. I am glad you liked the post on Delannoy.

You might also like the posts on Indian Service personnel marching in Paris on Bastille Day, and the story about a Keralite officer claiming to have arrested Rommel.

The respective urls are:

Dear Mr Abraham Tharakan,
Thanks for your comment. I went through the posts on Indian Service personnel marching in Paris on Bastille Day, and the story about a Keralite officer claiming to have arrested Rommel. Also read about Kochi during WW II. All of them are interesting reading.

My father served in Kochi for some time during WW II in the Coastal Defence Flight of RIAF. And that's the time I was born.

Dear Tharakan sir,
Once again another brilliant article from u .
King Anizham Tirunal Veera Bala Marthanda Varma was the first & only Indian King to beat European colonists without using any modern weapons , both on land & sea(downed a Dutch fleet as well !). Travancore was also the 1st Asian power to beat a European force(b4 this unique honour went to the Japanese forces). It is written that the Dutch & allied forces(of Kottarakara, Kayamkulam & Cochin?) couldn't even make a sensible resistance against the Travancore Army.
Delannoy's 'Nedumkotta' withstood the attack of the French-trained Mysore forces under Tippu. Even though the British promised help against Tippu, they didn't kept their word. Again the Nair Pattalam had their victory. Tippu had boasted that he would make the Travancore Maharaja(the great Dharmaraja) his personal slave & will use the "Kodimaram" of Sree Padmanabhaswami Temple to tie his horse!
The Indian Postal Department released a Rs.5 stamp on April 1, 2004 to honour the formation of Nair Pattalam/9th Battalion of Madras Regiment.

jk47, thank you for the comment. I didn't know about the stamp.

If you haven't read it yet, please go through my post From Venad to World Focus: The Travancore Royal Family

Dear Tharakan Sir,
A very happy & prosperous Deepavali to you & your family.
I read the above mentioned post by u,& felt enlightened by it. Thank you very much for correcting the wrong info i had posted in my comment regarding "Nedumkotta"; if u had not i would have believed that misinformation to be correct. I guess not everything one reads on the internet is correct! Once again, thanks. Have a good day sir.

Dear Tharakan Sir,
A very happy & prosperous Deepavali to you & your family.
I read the above mentioned post by u,& felt enlightened by it. Thank you very much for correcting the wrong info i had posted in my comment regarding "Nedumkotta"; if u had not i would have believed that misinformation to be correct. I guess not everything one reads on the internet is correct! Once again, thanks. Have a good day sir.

The name of Chapter 10 of the book "Memories of Captain DeLennoy" is "The Pulaya regiment of Travancore".
I think by mistake you mentioned it as Nair soldiers which is factually incorrect. The Kulachal war occured in 1741 and those days pulayas were too good in sea battle.

Prassoon Suryadas, I didn't know that De Lennoy had written his memories. Please let me know where it is available.I would like to read it.

As far as I know the Colachal war was fought mainly on land and regiments, Pulaya or otherwise,are normally land bound.