A Temple of Gold 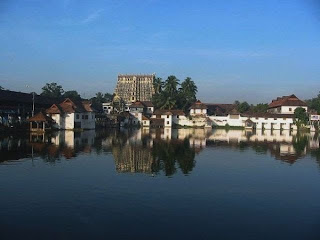 Sree Padmanabhaswamy Temple, Trivandrum is in the news the world over for its colossal collection of gold and gems. The Kerala High Court had ordered the Kerala State Government to takeover the administration of the shrine. For fear of contempt of Court, I am not saying anything about the judgement.
Fortunately the Supreme Court of India intervened and appointed a seven member team to inspect the assets of the shrine managed by a Trust constituted by the Travancore Royal Family. Reportedly, complete records of what the secret cells contain already exist and that all along the Royal Family and the British were aware of it. But nobody would have estimated that it may be worth around   1,00,00,000 crores rupees. This is sure to upset the estimates given in my post India’s gold stockpile, Kerala’s gold rush
No harm rechecking the temple cache, but as the news spread, the police deputed an Addl. Director General of Police and an armed force to safeguard the valuables. So far, only Lord Padmanabha was doing that job.
What set these events rolling was, according to a TV debate yesterday, the usual Kerala muck - irresponsible trade unionism and unjustifiable monetary gains. What I understood was that there is friction between two trade unions (are they permitted in the Temple?), and a professional is inducing one of them to pursue the case.
According to what was said on TV this man is using Temple premises without rent or for a nominal rent; he had been asked to vacate but refuses. If this is true, the problems have been created for irrelevant and personal reasons.
Whether the Temple belonged to the Royal Family or the Royal Family and the Travancore State belonged to the Temple is an interesting point. After expanding the principality of Venad into the Travancore Kingdom Maharaja Marthanda Varma submitted himself and his State to Lord Padmanabha and in effect turned himself into a plenipotentiary of the Lord.  From that moment till now, the coffers of the Temple has been continuously filled and nothing was taken out.
I was in Trivandrum during 1947 – 49 and heard this story which not many in the public might be aware of. When the Indian Independence was nearing there was a great deal of apprehension about what would happen to the private wealth of the Royal Family. An important gold and jewellery dealer from Bombay came in a chartered Dakota and took away the ornaments.
But not a single piece was from the Temple though if the Palace wanted, the entire lot could have been carried away. The Travancore Royal Family’s culture does not permit taking back what it has given. Some of the storage rooms have not been opened for over a century.
Just to conclude the airlift story, what I have heard is that the man who took away the Palace jewellery came back later. He had a full list of the items taken, the market price at which they were sold, and the sales proceeds less his commission.
The last of the Travancore Maharajas, Sri Chithira Thirunal Balarama Varma, after seeing part of the Temple treasure, is reported to have said, “Travancore will never have a famine”. The reason was that wealth was mainly meant to be used to obtain foodstuffs in case of a famine in the Kingdom.
I was shocked to hear V. Muraleedharan, BJP’s Kerala President saying, amongst other things, that the Travancore Royal Family has no right in the treasure. I have not bothered to check from which part of the State he is from. Apparently he does not know the culture of Travancore.
Let this gentleman realize that the Palace has made no claim that the treasure belongs to it. A bit of history also might not be a bad idea. At the beginning of the 18c, the Temple was managed by ettarakoottam, consisting of eight Ettuveettil Pillais and (half) Venad raja.
That Venad raja, Marthanda Varma, defeated the Pillais and took control of Sree Padmanabhaswamy Temple. He defeated the Dutch at Colachal. His armies marched northward and created Travancore State. Marthanda Varma Maharaja submitted his kingdom to Lord Vishnu in Ananthashayanam. That was the beginning of the treasure.
Marthanda Varma and his descendants led a frugal life. They never touched the treasure but safeguarded it and made it grow. Muraleedharan should realize that no devotee would have knowingly made offerings if he did not have faith in Sree Padmanabha and Padmanabhadasa.
How the treasure is to be managed in future is a very important matter. A perfectly effective and safe scheme should be formulated. But any proposition without consulting   the Travancore Royal Family and obtaining its approval would be absolutely unjust.
Posted by Unknown at 1:01 AM

The mind boggling treasure trove found in the mysterious vaults of the Sree Padmanabha swamy temple must have obviously been accumulated over a period of time by the former Maharajas of Travancore. They could have easily moved this wealth to some Swiss Banks immediately before Independence and amalgamation of the states. That neither did they do so nor did the members of the Royal family squander it away unlike some of their upcountry brethren says a lot about the integrity and benevolence of the former Maharajahs of Travancore.

Anand Antony, thank you for the comment. I followed the link you kindly provided and went through Babu Paul's article. It is good, of course.

The general impression is that Marthanda Varma submitting himself and his kingdom to Sri Padmanabha was an act of penance for the brutality that was involved in the many wars he fought. I am not aware of the Travancore Royal Family placing the responsibility on Sri Padmanabha for any misdeeds.

What has the case achieved? If any one suspected any malpractice, it should have been reported to the Palace or the Police. They do not seem to have had any great concern for protecting Sri Padmanabha's wealth. According to reports, the concern was personal.

Apart from the Royal Family, the British (and some others) was aware of the treasure. There is a version that during World War II the British sent a feeler for borrowing part of the treasure for war expenses. The reaction was negative.

It would appear that no other Indian temple was approached with this proposal. Sree Padmanabhaswamy Temple was different because the Maharaja was the sole decision maker.

Nebu, thanks for the comment. You are absolutely right.

Dear Mr.Tharakan,thanks for your mail, shall reply separately.

Regarding the ettarayogam (not ettarakottam), these were not the Ettuveettil Pillais but 7 Potti Brahmin families, one Nair family (Azhakath - my wife is related to this family by marriage) and of course the King who had half a vote

Regarding the Dakota etc, shall check with HH and let you know....

Ashvin, thank you for the comment and clarification. More information from you would be highly appreciated.

Very good article. This property belongs to Lord Sri Anantha Padmanabha Swami and it should be left as it is under HIS care, assisted by Royal Trustee Sri Padmanabha Dasa. Government's duty is just to safe guard the property.
Warm Regards,
Brahmanyan,
Bangalore.

Brahmanyan, thank you. I agree with you. Let us hope that the Supreme Court comes out with with a similar judgement.

Thank God the riches did not fall into the hands of politicians and specially Congress! Most of it would have gone to the swiss nad Leichenstein Banks.That the family made no effort to cart it away and the entire riches remain intact speaks volumes for the character of whosoever was involved in whatever the capacity - the Royal family, trustees and the purohits.... Thanks for the article Mr. Tharakan.
ERR