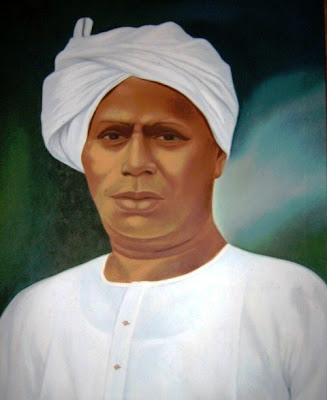 A man who would not shake even if the earth trembles – that was my maternal grandfather KC Abraham (Kallivayalil-Konduparambil). People respectfully called him ‘Pappan Chettan’. To us, he was ‘Ichachan’.

He was an uncrowned king. But then, there was the turban. The public believed that the Travancore Maharaja had granted him the privilege to wear it. That is not confirmed. He would remove the headgear only before peers and while praying or eating. A whispered joke was that he even slept with the turban on.

Ichachan’s dress code was unusual too. At a time when Kerala men usually did not use an upper garment, he wore white juba (kurta) and dhoti. In his book Pala – Ente Gramam, KC Thomas Kuttiyani says that Ichachan was perhaps the first in Kerala to use juba.

The man loved children but rarely expressed it. One exception was his first grandchild, my elder sister Mariamma. But when it came to manly matters, ‘men’ were preferred. I was the only one he took along to see a tiger which had fallen into an elephant pit in the forests a few miles from the house near Palai. Eight years old then, I was so excited and proud.

Among grandfather’s many achievements, the greatest was providing land to small farmers. With the expansion of organized plantations, land for cultivation became scarce. Ichachan acquired 7000 (one version says 5000) acres in Peruvanthanam (between Mundakayam and Peermade) and distributed it among the landless on sharecropping basis. It was a historic event.

The small army of beneficiaries rallied behind Ichachan when the Travancore Government wanted his help twice. One was when Lord Irwin, the Viceroy of India (1926-1935), decided suddenly to go on a shikar to what is now Periyar Wildlife Sanctuary.

The Government machinery could not organize the safari which also involved construction of accommodation for the Viceroy and entourage in the dense forest. Ichachan who was a good hunter too, stepped in with his men and made the arrangements. The excellent facilities at Edapalayam in the were originally built by him for the distinguished guest. The Viceroy honored him with a commendation.

The other instance was when the famous historian Fr. Henry Heras SJ wanted to explore Nilakkal (Chayal) deep in the forests. It used to be an important station on the ancient trade route between Tamil Nadu and Kerala. Ichachan organized the expedition.

Once I accompanied him to the zoo. We reached in time to see the lions being fed. Ichachan asked the keeper how much food was given to the animals. ‘Two kilograms,’ the man replied. With a sad smile Ichachan responded, ‘No wonder they look starved.’

Larger than life, Ichachan was! He died on February 8, 1972 at the age of eighty-one. KERALA CHRISTIANS – Their Contribution to * says of him ‘He was known for his bravery and courage, a man with an enquiring mind, and a great capacity for action. Though stern in demeanour, he had tremendous compassion and a fine sense of humour.’

On February 8, 1972 when Ichachan passed away I was only 10 years old. But even for someone who had known Ichachan only for a decade, that too as a child, Ichachan was at once considerate and commanding, lively and dynamic, and a picture of self-assuredness.

Thanks, Pappachan Chetan, for such a lucid thumbsketch of the man who could be called Palai's Pride of the 20th Century.

On February 8, 1972 when Ichachan passed away I was only 10 years old. But even for someone who had known Ichachan only for a decade, that too as a child, Ichachan was at once considerate and commanding, lively and dynamic, and a picture of self-assuredness.

Thanks, Pappachan Chetan, for such a lucid thumbsketch of the man who could be called Palai's Pride of the 20th Century.

I wonder if your ancestors recorded history for posterity - at least i hope so. there is so little of documneted kerala history - whatever little is there comes from a non keralite view point!!

Maddy, Ichachen once said that if his life history is to be recorded then both the upbeat as well as the depressing facts have to find mention in it, as he wanted to be honest he would rather not document it.

Ichachen had a small steel car the roof of which could be opened backwards. It had a number of small cups inside which I believe was to keep the ‘Murukkan’ items (Paan). He never used it and was always on his office table at the ‘Chavady’ (Glass veranda). Whenever I visited him I used to play with it. One day I wanted to take the car home with me. Amma wouldn’t allow me though I created a scene and started crying. However much I cried she wouldn’t relent.
Ichachen who was not there came to know about it from Emachy (Mrs.) when he came back. The next day driver Chellappan came in the Ambassador car carrying in it the small car as a gift to me, his Great Grand Son.

That was a very evocative piece about Ichachen. Tanks for the trip down memory lane. Stories of Ichachen are legion and as Maddy says, someone should compile mre such stories to give an insider viewpoint of Kerala's History & peoples. Perhaps you & your brother Michael (the historian in the family) should get togehter & make a start. We could all chip in with our little snippets, phots and such.

Pappachan chatten,
Given that so little written word exists on the history of a man who made such a mark on society at large - leave alone his many grandchildren and g/grandchildren, it is wonderful that you are documenting something that we can all share an enjoy. May I add a short story about our happy times at Kondoops.... on one of our school vacations Rani, Geetha and I spent a few days alone with the grandparents - many of you will remember that eating what came out of Eamachi's kitchen, was one way to her heart. As the quantities increased, our intake did too, until we reached a stage we could no longer keep up. We then discovered that if we drank the 'kallu (toddy)' used for making the appams, we would then be spared from eating them. You dont need a description of what happened other than Ichachan enquiring what we were being fed when he had 3 giggly girls sitting in his glass 'munvesham' room!
One other thing about Ichachan - he sang a song for us one evening-how many of you have been privileged to such music?
Thanks, Vimala

Dear Mr Tharakan
that was very intresting ,it is only by writings such as this such greats are revealed to all

One of the unsung 'visionaries' And probably the wealthiest and aristocratic of Syrian Christians of his Era.

Konduparambil Abraham (Pappanchettan) , Augusthy Kayyalakakom of Palai Central Bank , Marattukalam of Appolo Tyres, founder Directors of Catholic Syrian Bank,K P Hormis of Federal Bank etc are some of those unsung visionaries of the past.

You appear to have inherited his eyes. What a wealth of interesting stories you have in your own family -- it's wonderful that you are sharing them like this.

Hmm..konduparambil pappen is a big landlord and zamindar of eastern kottayam regions during old days.he was a martial expert as well.his hero stories are famous in vilakkumadom,mallikassery area.but times have passed and now kallivayalil or kuruvinakkunnel are not considered the same way they were 3 decades ago and back.
regards,
paikakkaran

The incident about seeing the tiger in an elephant pit near Palai would have occurred during 1940's.Surprising.