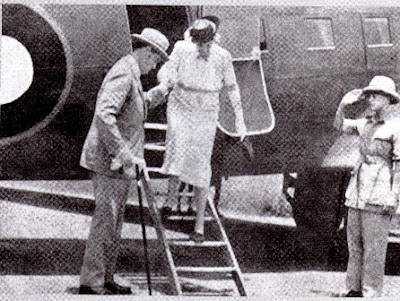 The photo above is of Lord Linlithgow, the then Viceroy of India and Lady Linlithgow alighting from a Douglas DC-3 plane at the Wellingdon Island airport, Cochin, circa 1940. On seeing this in the Lotus Club Platinum Jubilee Souvenir (Some Clubs of India), I was reminded of the old Dakota days. Till the Fokker Friendships were introduced in the early 1960s, Dakotas (the name given by the British to this American plane) served .

Those days we had the Great South Indian Milk Run, if one could call it that – a hopping flight, – – – – – – . That is perhaps the maximum take-offs and landings a pilot was permitted to do at one stretch of duty.

Later on, with Fokker and then Avro, the journey used to take three hours twenty minutes, perhaps the longest non-stop flight in .

The flights on the Dakota during the Monsoon seasons were sometimes gut-racking. The aircraft would get thrown around all over the place. Because the cabins of these planes were not pressurized, the cruising altitude for passenger operation, I think, was 7000-9000 feet (against the service ceiling of 24,000 feet). And that appeared to be the favorite level for turbulence.

But the pilots were not worried. They used to claim that the were so reliable and dependable. No wonder these planes, which first took to the skies in 1935, are still flying seventy years later.

They call the ‘the plane that changed the world’. Quite rightly too. It is a flying machine that combines economy with efficiency and safety.

Your post reminded me of the times we landed at Belgaum airport at night, before taking off for Bombay.It was Dakotas alright. I was at Satara Sainik School in those days.I remember Pope Paul VI making a memorable visit to Bombay to open the Eucharistic Congress in 1964.

Had they built a proper terminal building instead of tents by the time you were using Belgaum airport?
Abraham Tharakan.

Yes, they had built a terminal.But the long walk to the building from the plane, in the dark..

Good article. I have been a passenger on the early Fokker friendship flights (Bangalore to Cochin) in the 1970's and decades later I have flown as commander on the F-27's! They have all been withdrawn from service.

The last I saw of a Dakota in India, that was in flying condition, belonged to the Aerial Survey department in Calcutta, I think that was in 1999 or so. In the U.S. I have seen them flying even recently. Flying examples of the Douglas DC-3 in the U.S. can be found at Opa Locka Airport near Miami. I saw the same Dakota (DC-3) airframe fitted with a turboprop engine flying in Guatemala as well.This modified version was also used succesfully in South Africa as it enabled the same aircraft to fly faster and burn less fuel.

Thank you Capt. Anup Murthy for your interesting and informative comment.

Hi
I was amazed to hear Belgaum airport had night landing fecility since then, the latest is Central Govt is expanding and building new terminal at Belgaum, but the runway still need to be extended, one more fact is near by Belgaum Airforce base parade ground have two old C-47 or DC-3 Decotas parked at each corner ,these birds still look eligant.

Thank you Satyadeep. I have passed through Belgaum airport during daytime only. Glad to hear that the airport is being expanded.

Carrizo, thank you. It would be nice if you care to share some of your Dakota experience with us. I could consider publishing an article of about 500 words, which conforms to the blog's policy.