Recently I came across an interesting Blog ‘Musings from Antique Origins’ (http://muralirvarma.blogspot.com/) by Murali Rama Varma. A post titled Some Royal Correspondence carries the photo of a handwritten letter dated 4th January, 1893 by Sri Moolam Rama Varma (Maharaja of Travancore 1885-1924) to one John Rhode.

The letter mentions that during a visit to the State the Governor of Madras was able to shoot a tusker. The blogger explains ‘In those Raj days, hunting was an essential pastime when the Viceroy or the Governor visited the princely states. These were done with much opulence and fanfare and detailed arrangements.’ 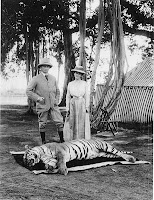 The pre-Independence issues of The Illustrated Weekly of India invariably carried photographs like the one here. Usually the hunter would wait on a machan (a high platform on a tree) with a small animal tied below to entice tigers. Or a team of drummers would ‘beat the forest’ to drive the target animal towards the hunter.

Once, in 1968, I was with a group which became involved in a tiger shooting. We were at a large cardamom estate in Kerala’s Nelliampathy Hills. It belonged to the late Mr. Mathew Marattukalam who was the first Managing Director of Apollo Tyres Ltd. One of his friends in Delhi had sent a hunter, Nath (name changed), who had never been to the Kerala forests before.

Nath accompanied by the well known local hunter Kutty (name changed) and a guide left for the forest in the afternoon looking for wild buffalos. Around sunset we who remained in the estate bungalow heard a shot. A team of coolies left for the area from where the sound came to carry the trophy back. It would take them about three hours to reach the spot.

After a while there was another shot. That was not a good sign. We were worried but early next morning the hunters returned to tell the story. Nath had killed a buffalo. They waited in the darkness for the coolies to arrive, alert to the danger of prowling tigers attracted by the smell of the buffalo’s blood.

In the forest there are indications when a tiger approaches. Small animals start running away. Nesting birds fly off noisily. Then there are an experienced hunter’s intuition and instinct. On a sixth sense, Kutty switched on his headlamp and saw a tiger about thirty feet away ready to spring. He shot almost in a reflex action.

By about 8 o’clock in the morning the coolies brought the dead tiger and buffalo to the bungalow, accompanied by many tribal people. For them tiger meat is a delicacy. They skinned the tiger expertly, smeared the inside of the hide with turmeric and salt so that it wouldn’t spoil and carried away the stripped carcass.

Killing a tiger was a serious matter. Kutty could have got off without much problem if Nath had testified that the shooting was in self-defense. But he was not an eyewitness though present on the spot.

He had fainted the moment the tiger was sighted!

Also see: The last of the Travancore Maharajas

There used to be a very nice star hotel in Lucknow which was once a palace. it was called carlton hotel. On the walls there were fantastic stuffed heads of all kinds of game..It was some ambience, dining there with these heads looking on..

Have anyone read the books of Kenneth Anderson, a Scot who lived in Bangalore till he passed away in the 1970's? He was an avid hunter, especially in pursuit of man-eating tigers and panthers , along with killer elephants etc.. his books are a must read.. since his exploits are mainly in South India, including one in Kerala Wayanad area..

maddy I remember the hotel. It was a red building if my memory serves me right. Now it has been converted to a modern hotel.

kariyachan, than you for the comment.
I haven't read Kenneth Anderson. Can you give some lead that will help me to locate his books?

Helo Sir;
It is my pleasure to do so.
Please check this link on Wikipedia to get an idea about him.

He was considered the Jim Corbett of South India

There are electronic versions of two of his books available for free download.

Nine Man-Eaters and one Rogue


His books are available from Rupa Publications,on paperback.

kariyachan, thank you for the information.

There is e group in the name of kennethanderson@yahoogroups.com. You can get all info on KA.
Jay. Bangalore