Today is Vishu in . Also, Puthandu in Tamil Nadu, Baisakhi in Punjab and Bihu in Assam. Is this the day on which God created Earth? We shall come to that later.

Vishu, which is one of the equinox days according to the Indian astrological calculations is celebrated on the first day of the month of Medam (usually coincides with April 14) in the Malayalam calendar. It is more of a New Year event than a religious function though mostly the Hindus observe the day.

The belief is that the New Year should start with seeing auspicious items. For this, a collection of such articles is prepared the night before and kept for the members of the family to view first thing in the morning. This is known as ‘kani’. The other important part of Vishu is ‘kaineettam’ (handsel). Usually the eldest member gives coins to the others as a token of good luck.

An integral part of the ‘kani’ is ‘konna’ (cassia fistula) flowers. 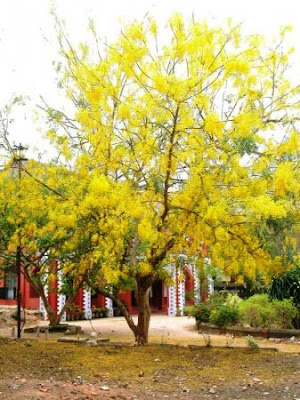 Photos: Sibin (above)
PrasanthC (below) 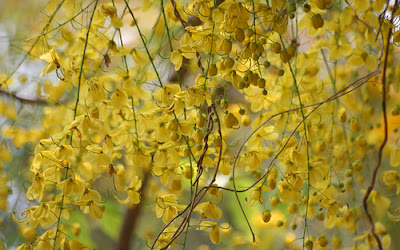 One cannot imagine Vishu without these golden yellow beauties. But of late, Kerala is having a scarcity for them around Vishu time. The reason is that the konna trees that used to flower invariably in late March/ early April have started blossoming in February and early March these days. According to some botanists, global warming causes this early blooming. Consequently, Kerala is importing the 'golden shower' flowers from neighboring states for Vishu.

The customs relating to Vishu differ from place to place. The event is much more popular in among the upper castes than in the South. In my area, Olavipe in mid-Kerala, only the 'lower caste' Pulayas observe the day. This appears to have a link to the agricultural operations in which, traditionally, the Pulayas had a major role to play.

The preparation of the rice fields for cultivation starts in April. On the morning of Vishu, the ‘kani’ for the Pulayas was the face of the landlord on whose fields they worked. Couple of seniors among them would go to the ‘house’ at 4.30 A.M. The landlord would be waiting for them, wearing fresh clothes after bath.

The visitors would hold up torches made of dry coconut fronds to see the landlord’s face. After that they would each hand over a silver-looking coin. Formerly it used to be a silver mint known as ‘panam’. Its value was four ‘chakarams’ or about 1/7 of a rupee. Now a one rupee coin is used. (See my post at http://parayilat.blogspot.com/2007/01/some-memories-of-ww-ii-cochin-and-1940s.html)
Later on in the day, each of the Pulaya representatives would be given a measure of paddy. This practice continued till I shifted to Chennai three years back.

Now, about creation. In the readings in some Syrian Christian liturgy, particularly during the Holy Week, it is stated that God created the earth on Medam 1. Considering the equinox factor, this sounds logical.

Note: Click on the title to read about Syrian Christian.

Nice post, its a really cool blog that you have here, keep up the good work, will be back.

Thank you, Biby. Appreciate your comment. Do visit the blog whenever you have the time.
All the best.
Abraham Tharakan.

Happy Vishu to every body. May Krishna bless you on Vishu.

we have lot of Malayalam cards for vishu. Please feel free to visit and send it on vishu at 365greetings.com
vishu greetings