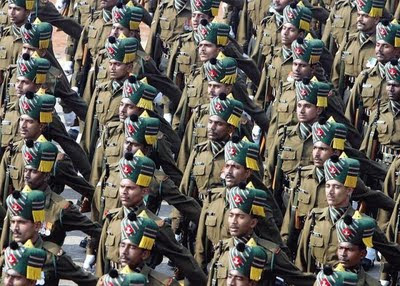 'Thambys' of the Madras Regiment on the march.
(Click to enlarge.)

"Press we to the field ungrieving,
In our heart of hearts believing
Victory crowns the just.

Hence the faith and fire within us
Men who march away."

The story is about a village in Tamil Nadu. Written by Padmini Sivarajah, it was carried on page 6 of The Times of India, Chennai Edition on October 12 under the title “A village where every home has an armyman”.

The hamlet is Perumalthevanpatti in Virudhunagar District. It has about 750 houses. What is amazing is that each of these houses has at least one soldier. The population of the village includes 375 people in active service and 522 retired servicemen.

The dream of every young man of this place is to join the army. This attraction to soldiery started 57 years back when one Perumal joined the army and rose to the rank of Major. He became the hero of the village and others followed his steps. To day, his son, P. Thirumal is a serving Major.

The reporter quotes one B. Gokulkannan of the village, “It’s not that we don’t want to become scholars, doctors and engineers, but the thought that we should serve the nation from the front is engraved in our minds and that is what we want to do.”

And the boys start work out on the village playground to develop their bodies to the army standard. There are enough ex-servicemen around to guide them along.

The girls of the village consider men who have joined the armed forces as the most eligible.

I salute you, men and women of Perumalthevanpatti.

(You should be able to get the full article by Padmini Sivarajah on the Internet.)

Interesting! I wanted to see both my sons in uniform; unfortunately both are not at all inclined. Do you think it would have made a difference had I shifted to Perumalthevanpatti when my children were toddlers?

Inspiring. And in a way, worrying.
Because kids, worship.
When Kapil burst on the scene, we had kids running in and bowling hard.
Sachin happened. And every short kid had a hope.
Sad, because unfortunately the same holds true for when the models are absolutely undesirable.
Especially in smaller towns, with lesser exposure.

Every Indian should be proud of this small village in Tamilnadu.

hi.. just dropping by here... have a nice day! http://kantahanan.blogspot.com/

Nebu, that is an interesting question.

perumalythoma, you have a point there.

agp, I agree with you.