I felt so proud watching on TV the Indian contingent leading the Bastille Day parade in yesterday. The boys marched perfectly as the strains of ‘Kadam kadam badaye ja..’ and ‘Sare jahan se acha…’ reverberated along the Avenue des Champs-Elysees.

I wonder how many of the millions who watched the parade on July 14 knew the historic significance of the Indian soldiers’ presence in . The Indian Army had sacrificed much to save France and Western Europe from the Germans. According to Peter Francis, Commonwealth Graves Commission, “"Very few people are aware of the role Indian troops played in both world wars."

In the First World War the Indians fought mostly in Western Europe and the . In the Second World War the 2.5 million-strong Indian Army saw action mainly in the Middle East, Africa, and the Eastern Theater.

About 140,000 Indian troops – 90,000 on the front line and the rest auxiliary - fought in and during World War I. Some of them were in the fray within a month of the outbreak of hostilities. They were at Neuve Chapelle, and at where Khudadad Khan (see photo) won the Victoria Cross – the first Indian to gain that honor. 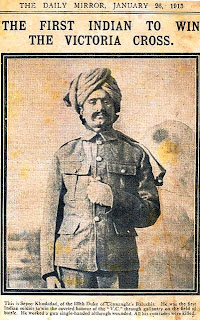 The British Indian Army won 13,000 medals in the Great War. That included 12 Victoria Crosses. (The Second World War tally was 30 Victoria Crosses.) But the toll was high. The estimates of Indian sepoys who died or were missing in action on the Western Front differ from 48,000 to 65,000. There are memorials for them at several locations in . The one at Neuve Chapelle is perhaps the best known. (See http://ww1cemeteries.com/othercemeteries/neuvechapelleindian.htm)

What drove those brave men to fight far from home for a cause which may not have been very clear in their minds? The Indian National Congress was supporting the British war effort on the conviction that it was the best bet for ’s independence. Did the recruits, mostly from the villages, understand that? Alternatively, had they developed a tremendous loyalty to King Emperor George V about 60 years after ’s First War of Independence? Or did they put themselves on the chopping line for the pay of eleven rupees per month?

In this context an article, and the Western Front by Dr David Omissi in the BBC’s World Wars series (http://www.bbc.co.uk/history/worldwars/wwone/india_wwone_03.shtml) is interesting. He quotes a letter one Indar Singh wrote home from in September 1916, 'It is quite impossible that I should return alive. [But] don't be grieved at my death, because I shall die arms in hand, wearing the warrior's clothes. This is the most happy death that anyone can die'. Izzat? 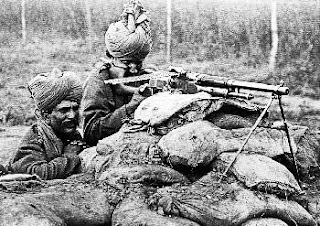 I must mention here the two great novels which were inspired by World War I. They are, All Quiet On The Western Front by Erich Maria Remarque and Across The Black Waters by Mulk Raj Anand.

Perhaps the most famous poem of that war is In Flanders Fields by a Canadian, Lt.-Col. John McCrae (1872 - 1918). Here is a quote from it, which is relevant to the Indian soldiers who died there too:

‘We are the dead. Short days ago
We lived, felt dawn, saw sunset glow,
Loved, and were loved, and now we lie
In fields.’

Poppies grow on those fields now. Do those flowers represent the dead soldiers?

THE DEAD AND THE LIVING DEAD. (Short Story)

Reproduced below is an an email comment I received:

'I liked your blog posting on the contribution of the Indian army in Europe during the 1st and second wars. The Flanders fields which you mention are very dear and familiar to us. They are full of poppies now.'

I, too felt proud watching the Indian contingent at the Bastille Day parade.
When I was a child, we had a watchman who had fought in the first world war, fighting for the British Army in Italy and North Africa. He was very proud that he had done that, but alas, his life was no better once he returned to India. No pomp and glory for him, just the drudgery of a low paying job.

Your discussion on the possible motivation for these soldiers to join the army was very touching. I am guessing that the last sentence may be the predominant reason - "they put themselves on the chopping line for the pay of eleven rupees per month". However that doesn't diminish a bit the worthiness of their ultimate sacrifice. Indeed the driving factor for the vast majority of us anywhere to take up a job is the renumeration. We are judged on whether we did our job to the best of our ability. And indeed they passed this test. On another note one of leading lights of modern Hinduism or of eastern spirituality (depending on one's interpretation) was Mirra Alfassa, a French woman of Jewish-Turkish parentage. As Holy Mother she developed the Aurobindo /ashram at Auroville, Pondicherry. Along with Sarada Devi she was one of the leading lights of eastern spirituality. On still another note Bastille Day is celebrated every year in Pondicherry and you can see French and Indian flags side by side.

i feel it was more of loyalty that made them go and fight..rather than the 11 rupees they got..i saw the parade on internet too.

This article also brings into attention the welfare of the jawans. It is high time to stop the unfortunate and ridiculous practice of using qualified jawans as servants for the higher officers. Apart from inefficiency of using a qualified soldier as servant we should also consider the psychological scars this would produce in the minds of these proud soldiers. Minister Antony is serious about the welfare of the jawans and I have a feeling that he will carry out many significant reforms without making much noise. Please note that I am not blaming officers in any way. Many of my close relatives are army officers and I feel that they are not to be blamed for what has been already put in place. Any way this practice has to to be phased out. And it is better to do this without much fanfare and in a smooth manner.