Vanilla, the flavouring the world loves

Well, vanilla is the world’s most preferred flavouring. It accounts for a whopping 29% among all food flavourings, according to a 2006 study by the International Ice Cream Association.

Vanilla is an orchid, a climbing terrestrial one. Originally it grew only in . The natives used it for medicinal purposes, for making certain brews and also as an aphrodisiac. The Spanish brought vanilla to in the early 16c.

Here I am reminded of a story about a former Maharaja of Travancore. His spies reported that the Western traders were planning to smuggle some pepper cultivars to their country. His Highness laughed and said, “They can’t take away our climate,” meaning that pepper wouldn’t grow in .

But in the case of vanilla the problem the white men faced was different. The plant grew, but wouldn’t pollinate. They were to find out rather late that this critical function was carried out by Melipona bee. These insects were found only in .

So the vanilla languished, away from its homeland. In the 1830s Charles François Antoine Morren, a Belgian botanist discovered a method to artificially pollinate vanilla. But it was not cost effective. A break came about five years later, when a 12-year-old slave in France, Edmond Albius, found a way to hand pollinate vanilla.

Today three major cultivars of vanilla are grown in many tropical countries including (Karnataka, Kerala and Tamil Nadu). It can survive up to altitudes of 1500 above sea level. The vanilla orchid thrives in loose, well-drained soil with high organic content. 50% shade is required. Being a creeper, it requires support plants. Stem cutting or tissue culture can be used for planting.

The following photos from Olavipe shows different stages of the vanilla’s growth: 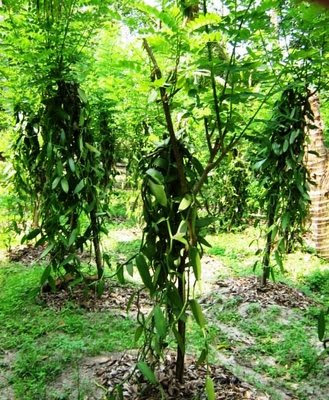 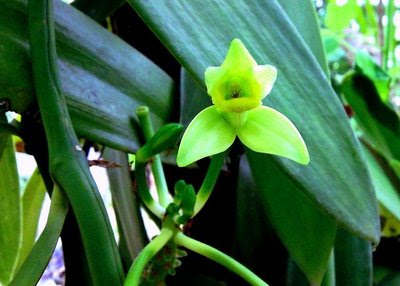 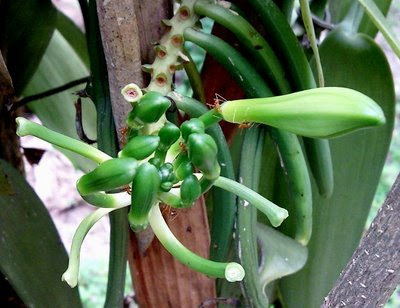 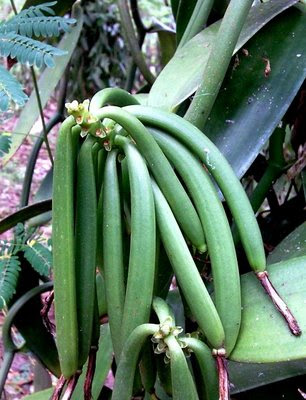 Once the pods mature, they are handpicked. Unless this is done at the proper time the quality would be badly affected and the commercial value would tumble drastically. Incidentally, other things being equal, the grading of vanilla is done according to length of the pods.

The plucked vanilla pods are cured and conditioned. Sun drying is a major factor in this process.

After the entire procedure is over, the vanilla is finally made available in the market mainly in three forms: whole pod, powder and extract.

And that’s the story behind vanilla, the ageless flavour.

Thanks a lot for the informative post and pictures. I have never seen a vanilla orchid plant,let alone flower or pod, before.

I say ditto to Raji. Thanks for the pictures and post from us novices

Good post. Very informative. A small correction though (if I am not mistaken)

Story about Kerala climate and pepper is credited to Samuthiri - telling his minister Mangattachan, that vasco da gama can only take pepper vines and cannot take away 'thiruvathira njattuvela'.

here you can buy these vanilla pods in small bottles...Cooking experts seem to favor those.

as anonymous states, it appears from history sources that the comment came from a Zamorin...

Maddy, probably the statement came from the Zamorin. As you know, this kind of stories have local variations.