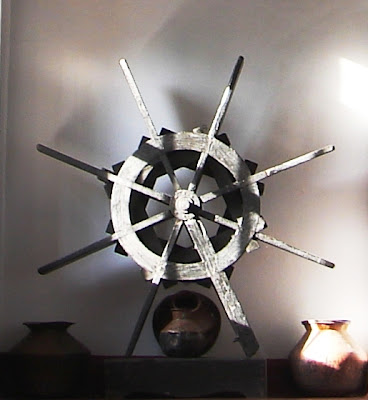 Chakram has several meanings in Malayalam language. Basically it means a wheel. A man from south Kerala who is aged 60+ might think of Chakram which was a monetary unit in the erstwhile (Some memories of WW II, Cochin and the 1940s.). A native of Kuttanad is likely to associate the word with chakram like the one in the photograph, which was part and parcel of life in that rice bowl of Kerala. It was extensively used in the paddy fields to control water level.

Now, a brief note about Kuttanad. It is a practically waterlogged stretch of approximately 110 sq. kilometers. A good portion of this is 60 centimeters to 220 centimeters below sea level. An area known as R Block is called Holland Scheme because water of the is held back by wide dykes and rice is actually grown much below sea level.

Chakrams were indispensable to the cultivation before the big pumps came. They are still used sometimes. The one in the photo is possibly the smallest in size. It has only 8 leaves and can be operated by one man using his feet, sitting on the edge of a platform. There were much bigger ones, some with even 48 leaves, if I remember correctly.

The large chakrams were operated by gangs of people. A structure would be erected over the wheel usually with areca trees or bamboos. This would have cross pieces at regular levels for men to sit and move the leaves of the chakram by pressing down with their feet. The gangs took turns to work the wheel.

It was a tough job. The men used to sing at work, to mitigate the burden. To borrow my own words: “They used to have songs for every step of paddy cultivation – for sowing, for harvesting, for threshing, for winnowing and so on. There was a rhythm in the growth of a plant and a tune to the counting of the measures of grain. Those were simpler times when people lived in harmony with nature.” (Morning After the Storm - Part 1.)

I do not recollect having spied any such structure on my not so itinerant travels in Kerala.

now that the monsoon is on and the mind is refreshed, a trip to see these thingss would be worth it.

Chakram in operation would be a rare sight these days. I our area they are no longer seen. They were used mostly in April-May to dry the fields and again during the rains to prevent the rice plants from submerging.
Kuttanad would be the best bet. If I am able to gather some meaningful information, shall get back with a message.