Islands in the Sun


Islands are fascinating. In the photo given below you can see two small ones. Islets, really. They are so tiny that normal maps don't show them. Of the four types of islands, continental, oceanic, coral and inland, these beauties belong to the last group. 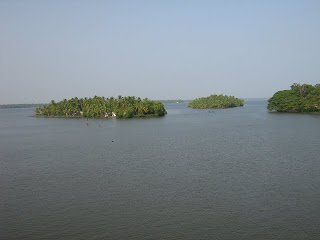 They are in the Vembanad Lake in Kerala, off Arookutty. I took this photograph from the Arookutty – Aroor Bridge last week. An interesting fact about them is that they did not exist about 60 – 70 years back. They emerged only in the last few decades. In my young days, several times I have seen the expanse of the lake without these islets. 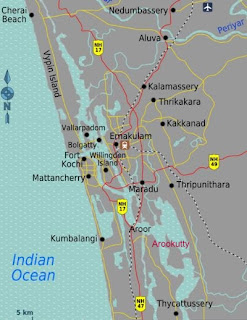 We used to travel by boat from our village to Cochin quite often. On such trips, the boats had to stop compulsorily at Arookutty which was, before Independence, Customs & Excise check post for the then Travancore State. North of Arookutty was Cochin State. All water transport going either way had to halt at Arookutty for inspection. (See: Some memories of WW II, Cochin and the 1940s.)

The customs office was on the land mass that you see on the right of the photo. That is the northern tip of the Pallippuram Island. Those imposing buildings are all gone now. The boats had to wait sometimes for hours to complete the formalities. All one could do was to either read or keep looking at the scenery around. The twin islets were not there then.

This brings us to the question how islands get formed. A Hawaiian legend claims that the islands there were pulled up from the sea by the demi-god Maui and his brothers while they were fishing. Such stories apart, islands are created by volcanic activity, coral deposits, landmass separating from the continent, or when water level rises and leaves only the elevated portions visible. Now, there is the trend of creating man made islands. (see Ecology: Vanishing Hills)

Arookutty’s twin islets were not formed by any of these. One could call them barrier islands. They were created by sand deposits by currents in the lake, say, something like river deltas. The tidal currents in the Vembanad Lake are strong.

The boating channel to the Customs quay was between these islets. I remember that the sand dunes that were rising in the water created problems for the vessels. Once the boat I was travelling in was stuck in the sand. Later concrete posts were placed on either side to identify the channel and there used to be some kind of dredging.

After Independence and the Native States of Travancore and Cochin merged, the customs procedure came to an end. The boating channel did not have to be maintained. And slowly the islets came up.

Both islands are inhabited now. I wonder how it would be to live on one of them. There is plenty of fish around and the scope for water sports is tremendous. But I feel the most exciting would be the monsoon time. The wind comes in strong across the large expanse of the lake. Short stays would be ideal but I don’t think there are any tourist facilities yet.

Photo by me. Anyone can use it provided that due credit is given to this blog.
The map is from WikiTravel at http://m.wikitravel.org/shared/Image:Kochi_map.png (edited).

Sir, I beg to differ
As far as I know some dredging was done during those years and the sand was deposited in three places as shown. The reason for dredging and creation of those islands as people were told those times was to avoid the sand deposit at Cochin Port. Later some people encroached those places and started staying there. Now those places are worth a fortune and some resort people are trying to purchase them

I wrote the piece from memory. It is difficult to accept that dredged material from Cochin Harbour was transported all the way to Arookutty for depositing particularly when there was enough land to be filled in Wellingdon Island itself and nearby areas. Secondly, the ‘artificial islands’ at Arookutty did create problem for boating; that is something the government would not have liked. Thirdly, Arookutty and Wellingdon Island belonged to different countries at that time and an inter-governmental agreement was required to carry out the operation; I don’t think history records any such accord.

Sorry, I could not understand ‘sand was deposited in three places as shown’.