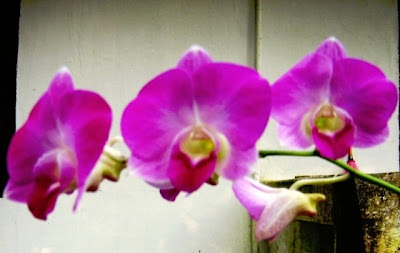 I am particularly proud of this photo which I took at Olavipe last month. The credit for it, however, goes to the idiot proof camera that I used to shoot it.

Two orchids like the one in the picture were found on the rotten branch of an ancient mango tree near our western gate. No idea how old the tree is. Several of its branches had been cut down for cremating some of our Hindu neighbours when they died. But this one broke and fell down.

How and from where did the orchids come on the tree? None of us has seen an orchid of this type anywhere in the area. Anyway, since the plants were found on a tree, they are epiphytes. An epiphyte anchors on to trees or shrubs, and according to Merriam-Webster’s online dictionary, “derives its moisture and nutrients from the air and rain”. This means that they are not parasites.They grow mostly in tropical forests.

Out of the many species of orchids (estimated number 25000 to 50000) , a major portion are epiphytes. The other type is terrestrial which root in soil. There are two more categories, lithophytes which grow on rocky terrain and saprophytes (mycoheterotrophs) which thrive on decaying plant matter. A photo of a terrestrial orchid, also taken by me at Olavipe, is given below: 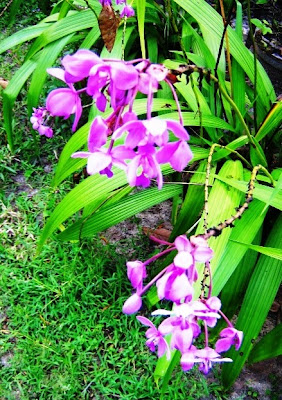 The size of orchid plants, depending on the species, can be anywhere from tiny to several feet in height. The general impression is that they grow only in the tropics. This is not correct. Orchids can be found in most parts of the world. Some of them however are endemic; they are seen only in a particular region. Many new species are being created on a continuing basis by cross pollination. Quite a few of such orchids are very popular.

Orchids are commercially important, essentially for the flowers. That is big business. The vanilla genus is a perennial favorite as food flavouring. A powder, made by grinding the tubers of certain terrestrial orchids is also used in cooking. Perfumers keep checking the scent of the orchids for possible use in cosmetics.

Coming back to the Olavipe orchid, we have made the aerial genus into a terrestrial one by potting it. Orchids are said to have enough adaptability for such conversion. I hope this is true.

Orchids are the prettiest among all flowers. The very word orchid is synonymous with exotic beauty. They may be rather fussy to cultivate, but the effort is truly worthwhile.

The orchid in the first photo looks like a Phal-type Dendrobium orchid. I have some which look almost exactly like it in my garden.
The dendrobiums are epiphytes as you guessed, but do adapt somewhat to terrestrial life if you pot them in an airy medium like coarse-grained river sand and dont overdo the watering. But, do be kind and find another perch for the poor thing : )
Funny how it reached the mango tree though.

Thanks for the information and suggestion. I am also wondering how the orchid came on the mango tree. Is it possible that some bird carried a poliated flower and deposited it on the branch? But I have not seen such an orchid elsewhere in Olavipe.

I think its quite likely that a bird, possibly a crow, was the transporter. Dendrobiums of various types are widely grown all over Kerala ever since the orchid-revolution in the '90s. So its quite possible that a plantlet caught the eye of a fidgety / curious crow who flew off with it to perch on the mango tree to inspect it at leisure?
Why am I thinking of laying the blame on a crow? Because they do it all the time to my orchids! Every year when the cold season makes its presence felt in Mumbai,we get this big flock of Jungle Crows that descend on our garden and proceed to pick to pieces every single thing I had nurtured the whole year through. Believe me, I really understand the term 'a murder of crows'!
I'm sure you dont have such ill-mannered crows in Olavipe but whatever their personality traits, in this case I think I should say,"lucky for you"!

that photo that you just took look the same as the orchid that i had delivered from my Tacoma Florist.