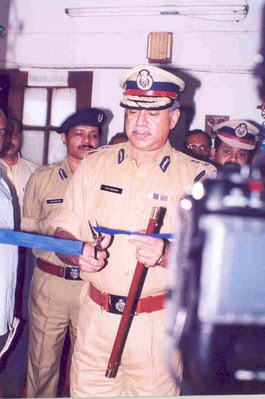 Hormis Tharakan when he was Director General Of Police, Kerala. 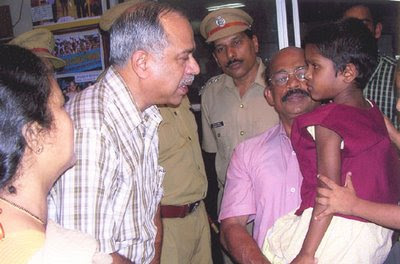 Hormis Tharakan and wife Molly at an orphanage.

A few excerpts from a detailed report by Times News Service [The Times of India] on 26 January 2005, are reproduced below:

'NEW DELHI: Prime Minister Manmohan Singh wants the "mess" in the country's premier spy agency, Research and Analysis Wing (RAW), to be "cleaned up", and that too "fast." The new RAW chief, P K Hormis Tharakan, has been given the clear mandate to do this, say sources.

'The PM has, in fact, asked Tharakan to rush to Delhi within "a day or two" to prepare the ground for taking over from outgoing RAW chief C D Sahay, who retires on January 31. "Tharakan has only six to seven months to retire, but may get a two-year tenure as the RAW chief," said one official.' [He was given a two year extension.]

'Apart from being upright and sober, Tharakan is an effective leader. He has transformed the Kerala police. He is very familiar with RAW functioning and can revamp the agency in a quite manner, without dividing it into camps," said an official.'

After completing the mission entrusted to him, very successfully according to the media, Hormis Tharakan retired on 31 January 2007. A 1968 batch Indian Police Service officer, he has served the country with distinction for 39 years. He is planning to go back home to Kerala to relax and to write. (He is a published writer.)

I am proud to say that Hormis Tharakan is my brother.
Posted by Unknown at 12:06 AM

Intersting blog. PKH Tharakan indeed is an excellant person, would like to know more about him and his family. Rumour is that he is tipped for posting as Governor in some state. That would be a proud achievement for Kerala and Parayil family!

Thank you for the comment. Glad you liked the Blog. Do visit again.

In my opinion, after nearly four decades out there on the field, a man deserves to return home.

Parayil Family never sought laurels. They came, quite incidentally. Makes no difference, really. We are what we are always.

Hello,
I stumbled on your site while surfing and it was heartening to know about Hormis Tharakan and yourself too. I do not know whether both of you remember visiting and staying at my place in Mumbai way back in 1980s. Hormis may recollect us as his neighbour in Pragati Vihar in New Delhi in the 1980s. I am now working for ICAO ( a UN body) in Montreal, Canada. I would love to hear more from both of you that is if you still remember- you can reach me at hsudarshan@icao.int With regards to Hormis and Molly, Sudarshan, joined by my wife Lalita.

Hello Sudarshan & Lalitha. Thanks. Hormis is now an Advisor to the Governor of Karnataka. I spoke to him. He remembers both of you. Have forwarded your comment to him.

We have told Adviser Tharakan that the citizenry is fed up with the shenanigans of the policticians and would definitely wnt the President's Rule to continue indefinitely! Things are moving on merit now in the state of Karnataka. And Mr PKHT is well regarded and respected. B G KOSHY

baldies, thanks for the comment. Shall forward it to Hormis.

Adviser Tharakan participated brilliantly in an Interaction with Christian leaders on 1/3/08 at St Mark's Cathedral Bangalore. Presided over by Francis Colaso, retired DGP of J& K and Karnataka the meeting was attended by Bishops and leaders of all denominations. Several petitions were received by Mr PKHT and he reassured the gathering he would personally handle the cases.

Mr PKHT comes across as a sober, mature listener and exudes confidence that comes from four decades of public service. We wish he stays here permanently!

Please ask Mr.Tharakan to write a book on RAW.

My name is Shilpa Mathew and I used to be a close friend of your niece Jessy Thomas who used to live in Ernakulam. I believe she is in the US married to Dr. Vettiankal. I am also based in New York. Please do pass her my number 201-313-1884 and kindly advise her contact details. It has been a long time indeed from our old days in Trivandrum.

PKH THARAKAN is a man who see all subordinates equally,listern to their problem and try help them.my father had worked under him and knows since he was ACP.

mr parayil a tharakan could you please advise mr pkh tharakan to start a blog where we can ask questions.relating to various issues
of national importance

i am Johns George Ettuparayil and Georgey George is writing to you. my great grandma is from Ayanat Parayil married to N.X Kurien Ettuparayil. Some how we would like to keep contact with you and like to meet Hormis Tharakan uncle. Give me a speedy reply.

johns george, Very happy to receive your comment. I remember your great grandfather Kuriachan Achan and his poem about the brother who died in UK very well. By the way, your great grandmother was from from out tharavad Velliara Parayil.

Do keep in touch. My email id id abrahamtharakan1@gmail.com

My brother had sent you an email. please check and reply at your earliest.

Hormis is definitely exemplary.I have seen in him in Chingavanam & Delhi.Spoke to him from TVM while he was in Srilanka during ISRO case.While entertaining us in Delhi,he told me a wonderful story abt OV Vijayan & David Selbourne.He also spoke abt Gino Lollobrigida.